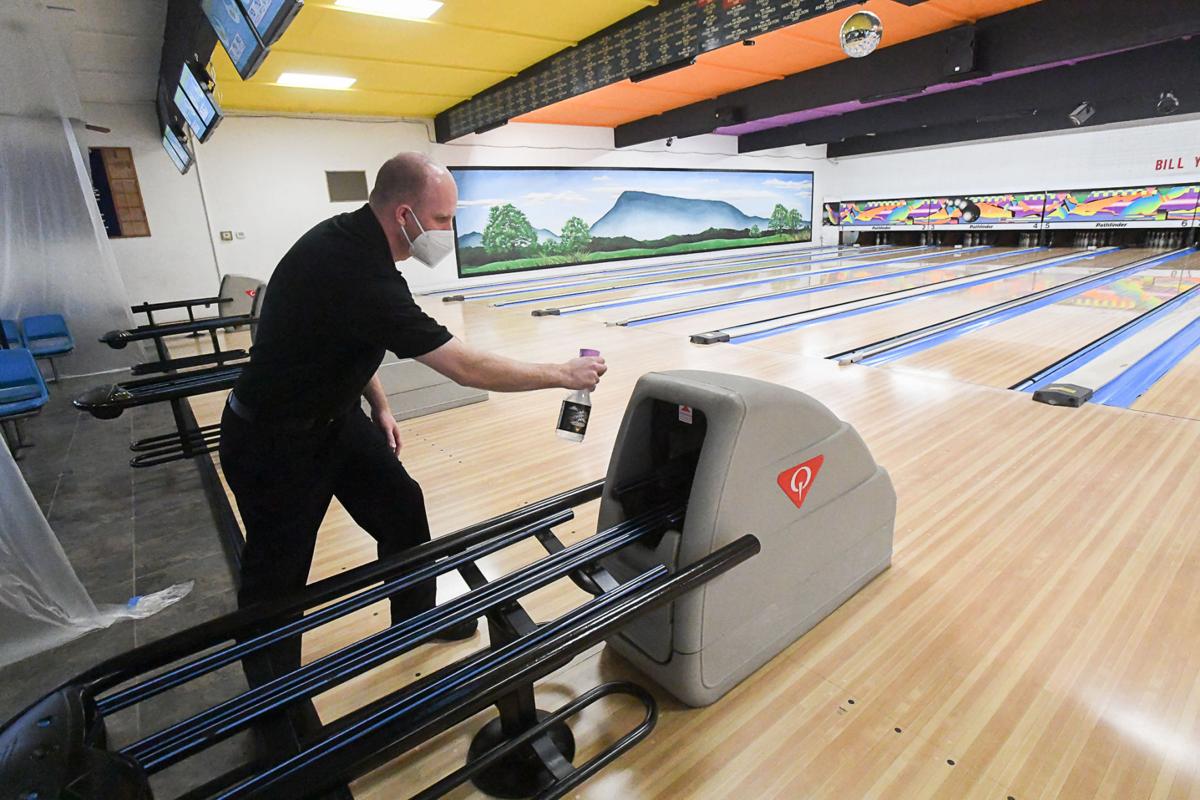 Scott Yarrow, the owner of Highland Bowl, demonstrates how he sanitizes the bowling lanes between customers. 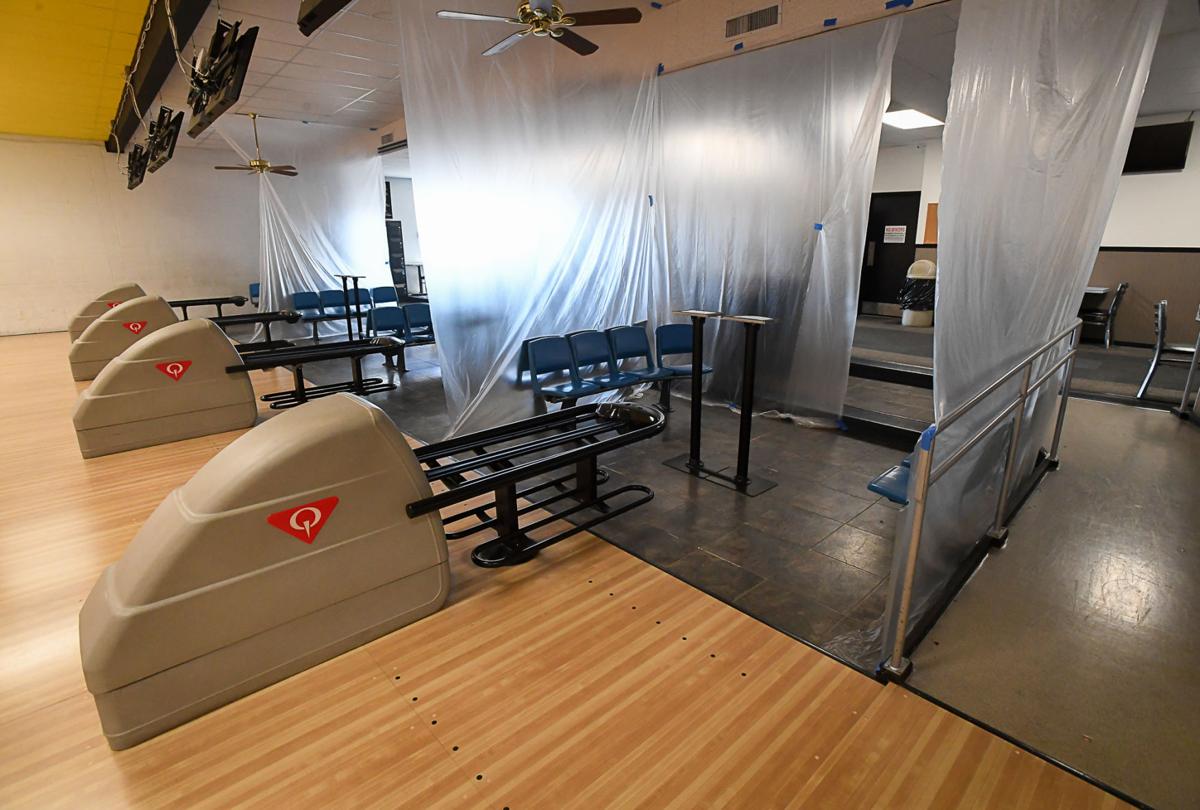 Plastic is used to separate groups of bowlers at Highland Bowl in Corvallis. 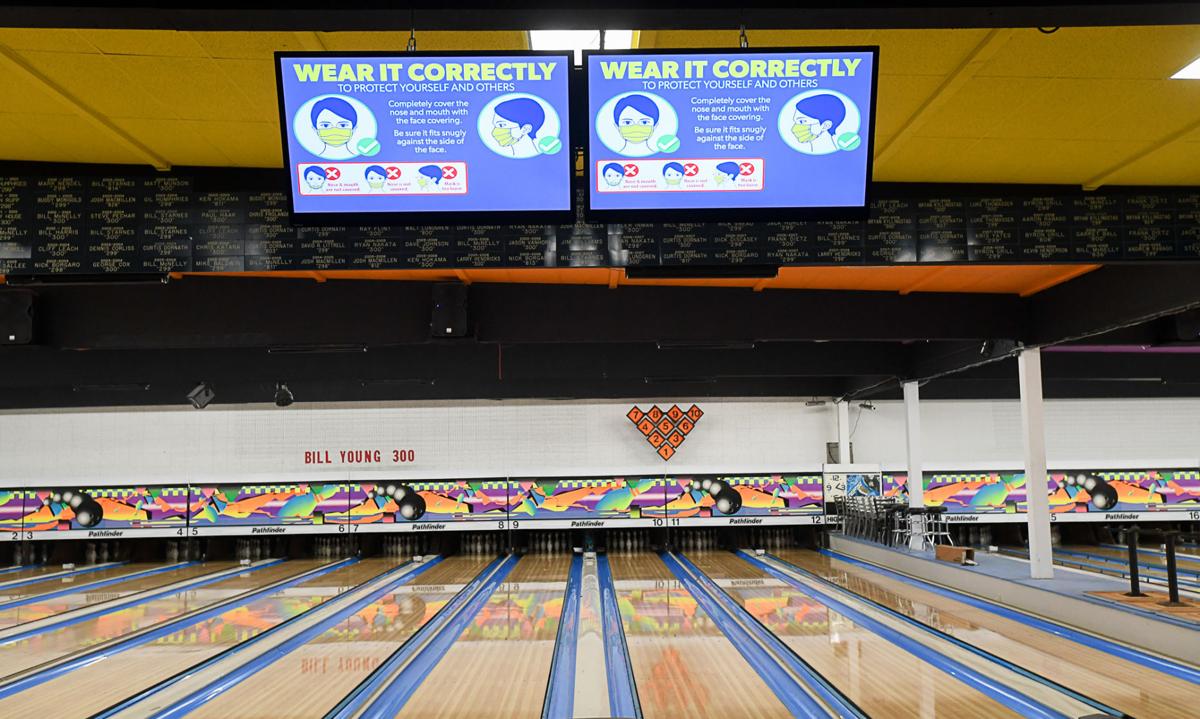 Messages reminding customers on how to correctly wear a mask display on the screens at Highland Bowl in Corvallis. 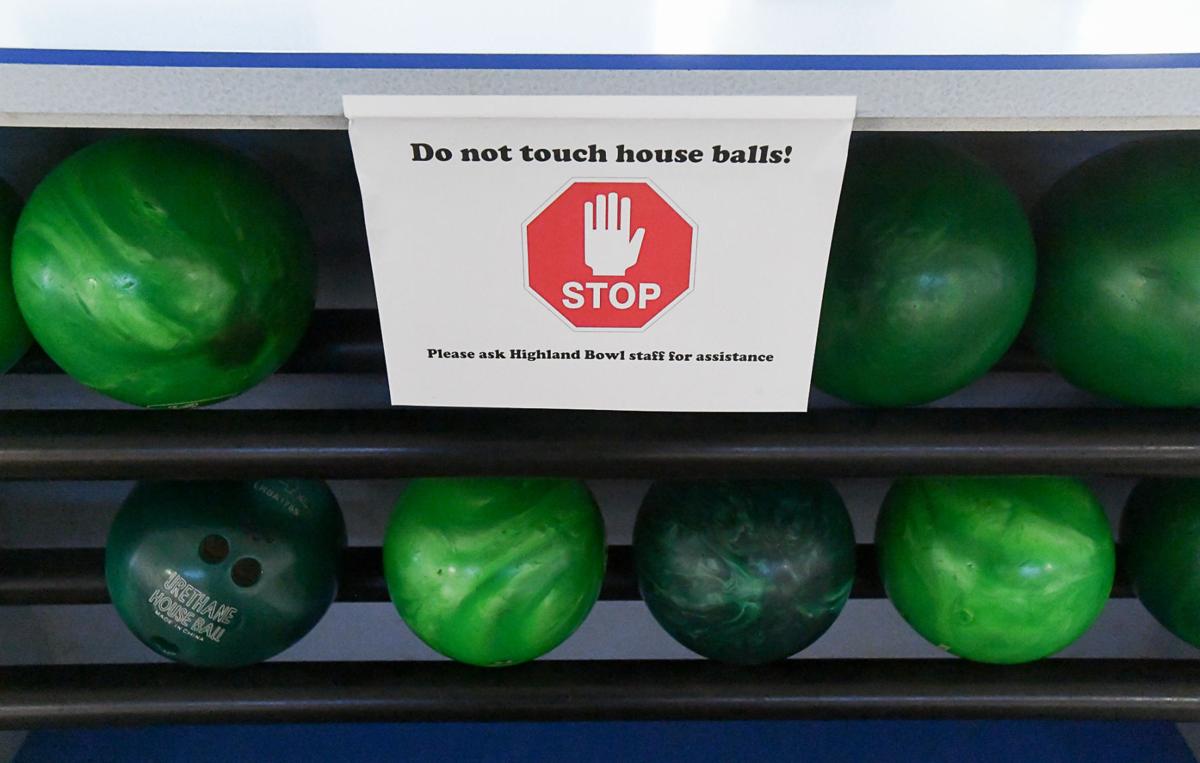 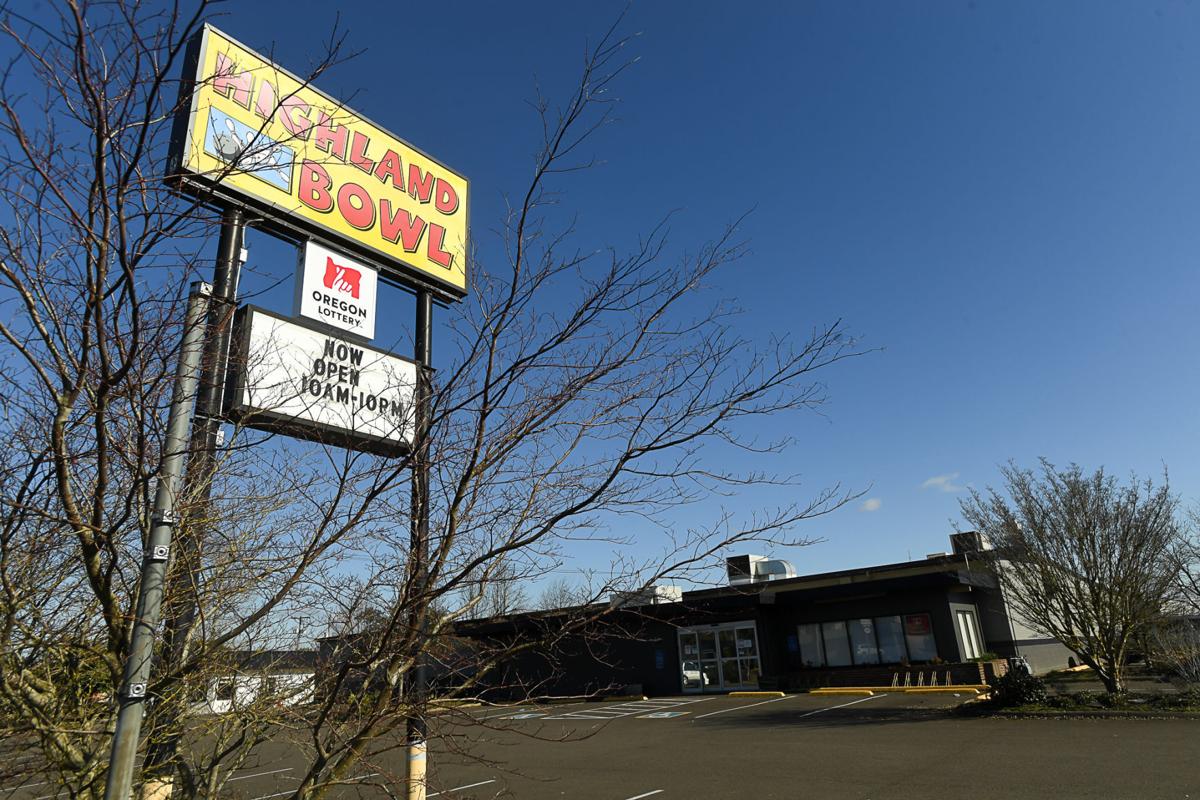 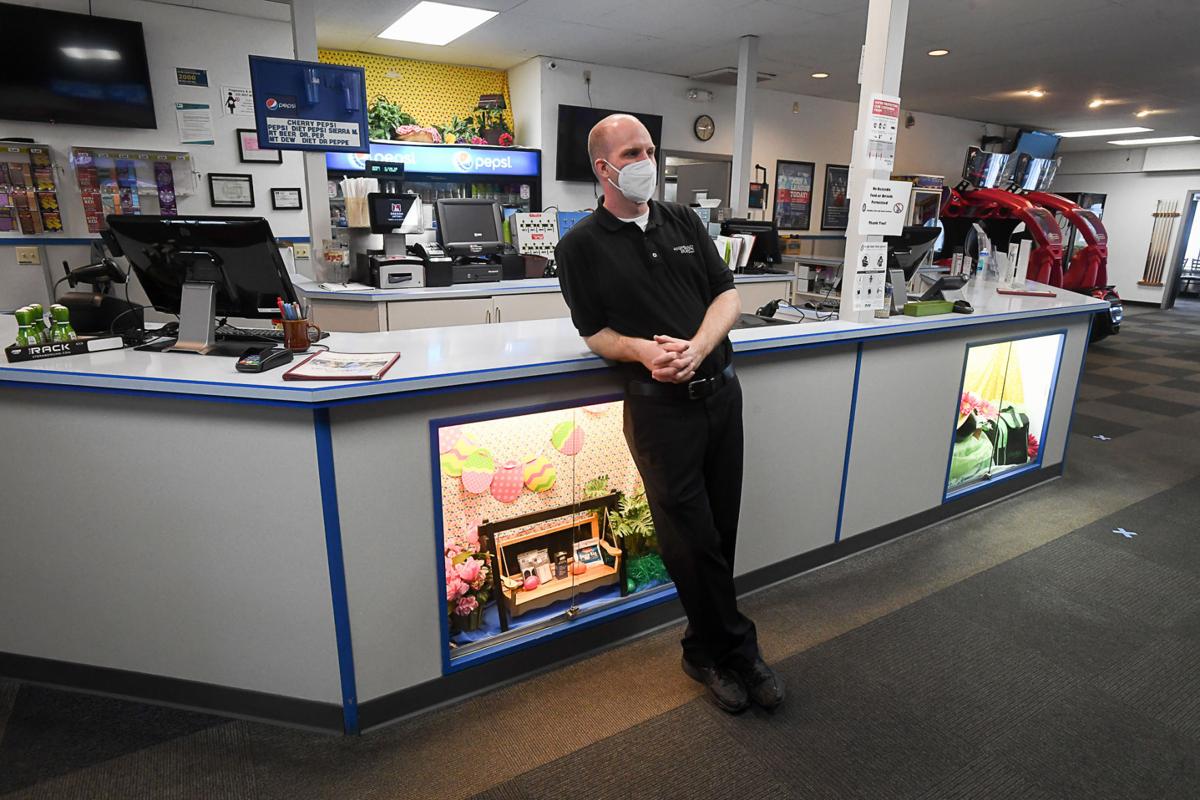 Scott Yarrow, the owner of Highland Bowl, discusses the arbitrary nature of COVID-19 restrictions and how they have hampered his business.

Restaurants in downtown Albany could reopen at 25% capacity or a 50-person limit, whichever is smaller, starting on Friday, but North Albany eateries a mile away in the same city had to remain closed for indoor dining. That’s because downtown Albany is in Linn County, which dropped to the state’s high risk category for the first time since November, while Benton County stayed at extreme risk.

“Everybody knows that the Willamette River stops the coronavirus,” quipped Kevin Fujikawa, the owner of Frankie’s Restaurant in North Albany.

“It’s frustrating. … It would be huge for us to be able to open,” he added, during an interview last week. He noted that in December, the situation was reversed, with Benton County restaurants allowed to open, but Linn County dining spots closed for indoor service.

Frankie’s currently is serving meals and cocktails to-go and to customers in a tent outside the restaurant, but with the cold weather, indoor dining would increase their sales significantly, especially on the popular Valentine’s Day weekend, Fujikawa said.

Treva Gambs, owner of Gamberetti’s Italian Restaurant, said she was happy to be able to reopen her downtown Albany location. Her Salem restaurant, however, remains closed to indoor dining for the time being.

“I feel that we’re not making enough movement,” she said. “We have to quit killing the small businesses. Again, we’ve done things really well in this state. Our numbers are really low, so let us do what we do well.”

Gambs added that she could have kept customers safe at 25% capacity throughout the pandemic because her restaurants have ample space for social distancing and are rigorously cleaning. Because the 9 to 5 nature of working has been disrupted, customers are spacing out their visits throughout the day, making the situation even safer, she said.

“I truly want to get the state open, not only for myself, but for the other restaurants, for the gyms, for everybody. I truly believe we are being responsible. We are being very, very careful,” she said.

Gyms and fitness centers, and indoor entertainment options such as movie theaters, also could reopen on Friday in high risk counties such as Linn County with 25% capacity, or a 50-person limit, whichever was smaller. Those are limited to six customers indoors under the extreme risk category. Among the other changes in the high risk category is that Indoor visits can also resume at long-term care facilities.

Scott Yarrow, owner of Highland Bowl in Corvallis, said that the state rules made no sense in how they were applied to different industries in many cases. “It gets really frustrating that all these other places are able to conduct business, and we’re shut down,” Yarrow said. He pointed out how customers could frequent nail salons or barbers, packed hardware stores or small shops. “In a lot of cases, people are in much closer contact than they are at our business,” Yarrow added. “The arbitrary nature of this is incredible.”

Highland Bowl was able to reopen earlier this month in limited operations, Yarrow said. The business has approximately 18,000 square feet of space, but only four groups of up to six people are allowed to bowl. Each group must stay in an area enclosed by plastic sheeting, and other safety precautions are in place. The establishment also currently can’t serve beer and burgers to customers, and in typical times, those result in volume sales.

At one point during the pandemic, people could eat at Highland Bowl but couldn’t bowl. Now, it’s the opposite.

Still, the situation is better than last spring, or for much of December and January, when Highland Bowl was completely shut down due to restrictions. “We had to lay off a lot of our staff. It’s very difficult to do that around Christmastime,” Yarrow said.

Yarrow added that it’s hard to find guidance for his sector; there isn’t any specific rules for bowling centers, which fit into multiple realms such as eating and drinking establishments, indoor entertainment venues and indoor recreations spots. At times, the guidelines for those business aspects contradict each other, so he’s asking for advice and interpretations from multiple agencies, including the Oregon Liquor Control Commission, Oregon Occupational Health and Safety Administration, the Benton County Health Department and more. Getting in touch with the Oregon Health Authority has been difficult, Yarrow said, and he worries that he’s risking violations even as he tries his best to follow the rules.

Most of the people who have been frequenting Highland Bowl since the pandemic hit are league bowlers with their own equipment. Many choose to visit the lanes when they know business will be slow, such as in the morning. “I think my customers feel safe here, even without the vaccine,” Yarrow said.

He argued that the state should be able to ease up on restrictions because people are wearing masks in Benton County, customers are demanding safety precautions, and almost all businesses are complying with regulations – and not out of fear of fines.

“As a business owner, the last thing you want is a customer to come in and get sick, or, God forbid, one of your employees,” Yarrow said.

He added that Corvallis is far safer than the Portland-metro area, which is now in high risk, but Benton County’s extreme level has been caused in part by Oregon State University students and the institution itself conducting more testing. In other words, Benton County has a more accurate picture of the virus’ spread than other jurisdictions.

Gambs agreed. “Their numbers are skewed by several factors, and the university is impacting Benton County’s figures, so that hurts the businesses,” she said. “We need different metrics, because I just feel there are some places that will never be winners.”

Alyssa Rash, spokeswoman for Benton County, said that OSU and its students do contribute to the metrics for the area. “I don’t think there’s any one particular reason or organization for why we are in the extreme category. Yes, OSU is doing a lot of testing, but they’re not the only group of people testing positive in Benton County,” Rash said.

Rash said Oregonians still need to be vigilant in the fight against the illness caused by the novel coronavirus. Other health officials have urged similar caution, including Dr. Anthony Fauci, the nation’s top expert on infectious diseases.

Oregon’s figures in general, including hospitalizations, are far better than in December, but new mutations of COVID-19 are emerging.

“As counties begin focusing on vaccinating our communities, it’s easy for all of us to forget how important prevention measures are,” Rash said.

Get ready for ‘supercharged’ economy after pandemic

Get ready for ‘supercharged’ economy after pandemic

The Oregon Health Authority reported 517 new confirmed and presumptive cases of COVID-19 Friday morning, including 31 in Benton County and 13 …

The Oregon Health Authority on Monday reported no new deaths attributed to COVID-19 for a second straight day. Oregon’s COVID-19 death toll re…

A Saturday ribbon cutting ceremony signified a new place in the mainstream business community for cannabis stores in Corvallis.

Oregon reports low caseload on Sunday due to processing error

Oregon reported 111 new confirmed and presumptive cases of COVID-19 and one new death from the illness on Sunday. Those figures, however, were…

Scott Yarrow, the owner of Highland Bowl, demonstrates how he sanitizes the bowling lanes between customers.

Plastic is used to separate groups of bowlers at Highland Bowl in Corvallis.

Messages reminding customers on how to correctly wear a mask display on the screens at Highland Bowl in Corvallis.

Scott Yarrow, the owner of Highland Bowl, discusses the arbitrary nature of COVID-19 restrictions and how they have hampered his business.