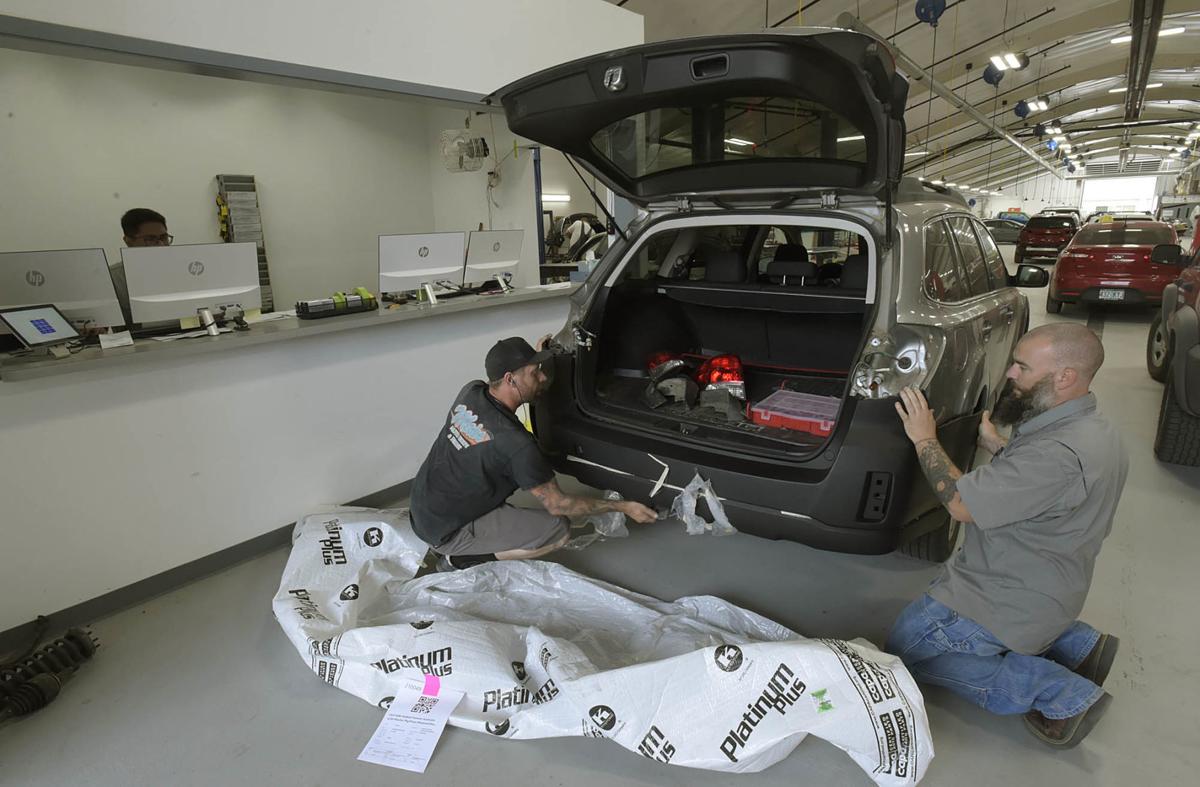 Jeremy Mosley, left, and Adam Strader prefit a bumper for a Subaru Outback at the new Main Auto Body downtown Albany facility. The business now has nine locations and employs more than 100 workers. 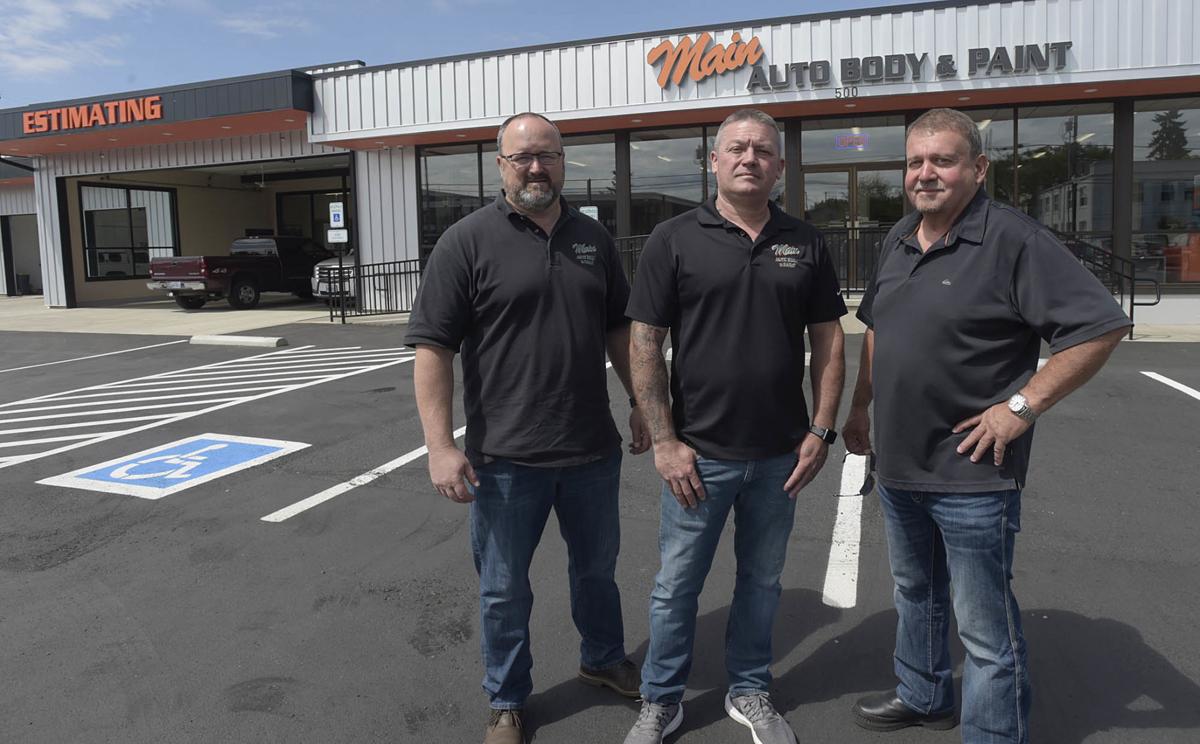 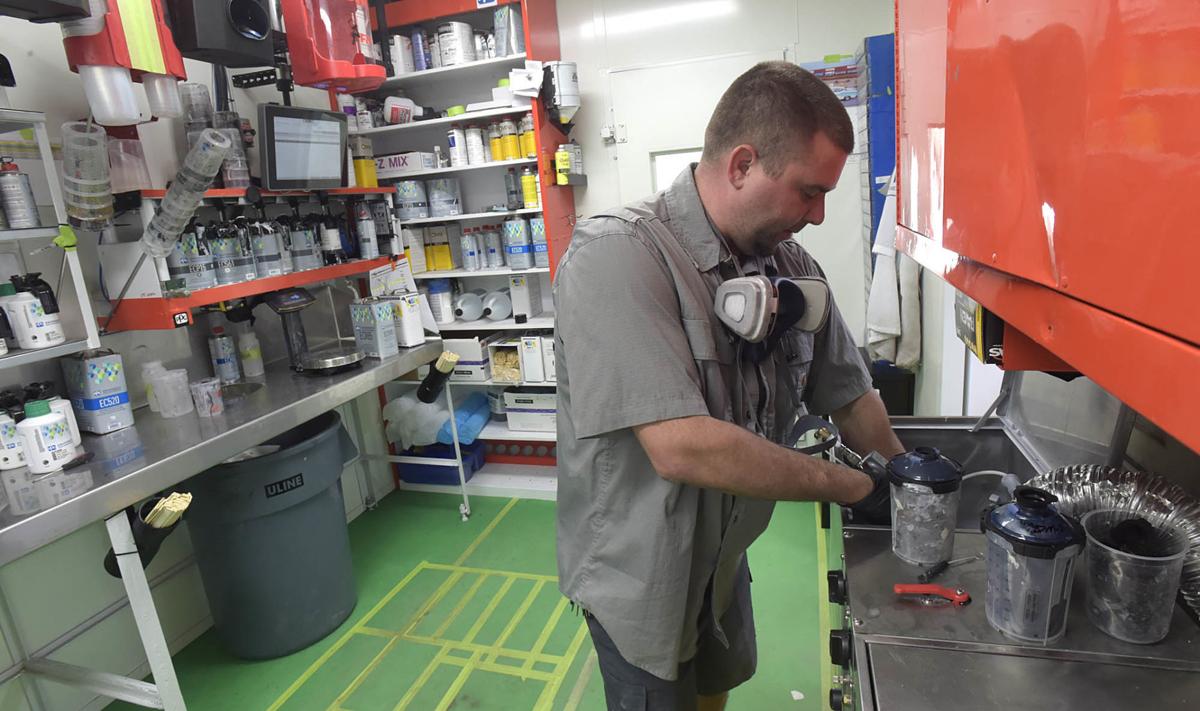 Cory Hooley mixes paint in the shop's mixing room. The paint, which is water-based, is more environmentally friendly then the solvent paints of the past.

Main Auto Body moved into a new location in downtown Albany in late April, and the former auto dealership at 500 Lyon St. SW is spacious, modern and clean.

The renovated structure is a far cry from the stereotype of dark and dirty body shops, said manager Bryan Bass.

“There’s nothing like this around,” he added. “You walk in here, it’s more like a doctor’s office or dentist’s office.”

Besides the professional setting, the move highlights the rapid growth of the business, which was founded in 1977 at Sixth Avenue and Main Street in Albany.

The Salem shop also has moved into a larger and upgraded space, he added.

General manager and vice president Bob Sams said more expansion could be in the works. “It’s not going to stop. If anything, it might pick up speed,” he added.

Bass credited the expansion to customer service and quality repairs, which have built trust with residents.

“It’s standing behind what we do — a lifetime guarantee on every repair that goes through here,” he said.

Main Auto Body’s new location also brings all of its operations under one roof. The shop was previously in two buildings on First Avenue and Second Avenue.

“We basically had to pull the electrical system out to start over,” Bass said.

“No stone’s been left unturned to make this into a top-notch facility,” he added.

But that took nearly a year after the company bought the business and property, Bass said.

Two brand new paint rooms also were installed, and Main Auto Body installed state of the art racks and welders, the latter of which can determine the type of metal and thickness of metal to deliver the exact amount of weld strength needed.

Main Auto Body’s new building also has space available for rent. “It could be anything. It could be office space,” said owner Steve Perlenfein.

The new location in downtown Albany also has better parking and brings another considerable advantage in terms of visibility. “We have so much traffic coming past here every day. It’s huge,” Bass said.

Main Auto Body also has added Jason Stavros to its team as assistant manager in January. He brought in years of experience with his family’s business, most recently known as Stavros Auto Services, which was sold to a Canadian firm.

Between Perlenfein, Bass and Stavros, the company has more than 100 years of experience in the business.

A grand opening for Main Auto Body’s new home on Lyon Street will be held from 11 a.m. to 3 p.m. on Aug. 10. The Albany Fire Department will be present and hold extrication demonstrations.

One of area's last video rental shops, in Sweet Home, to call it quits

SWEET HOME – Kathi Benson acknowledged that she was feeling melancholy about her upcoming retirement, largely because it means she’ll close he…

Thor Armory moved from Brownsville to a much larger Albany storefront in late April, and that’s allowed the gun shop to carry more inventory a…

Unemployment remained low in the mid-Willamette Valley in June, according to data released by the Oregon Employment Department on Tuesday.

Jeremy Mosley, left, and Adam Strader prefit a bumper for a Subaru Outback at the new Main Auto Body downtown Albany facility. The business now has nine locations and employs more than 100 workers.

Cory Hooley mixes paint in the shop's mixing room. The paint, which is water-based, is more environmentally friendly then the solvent paints of the past.