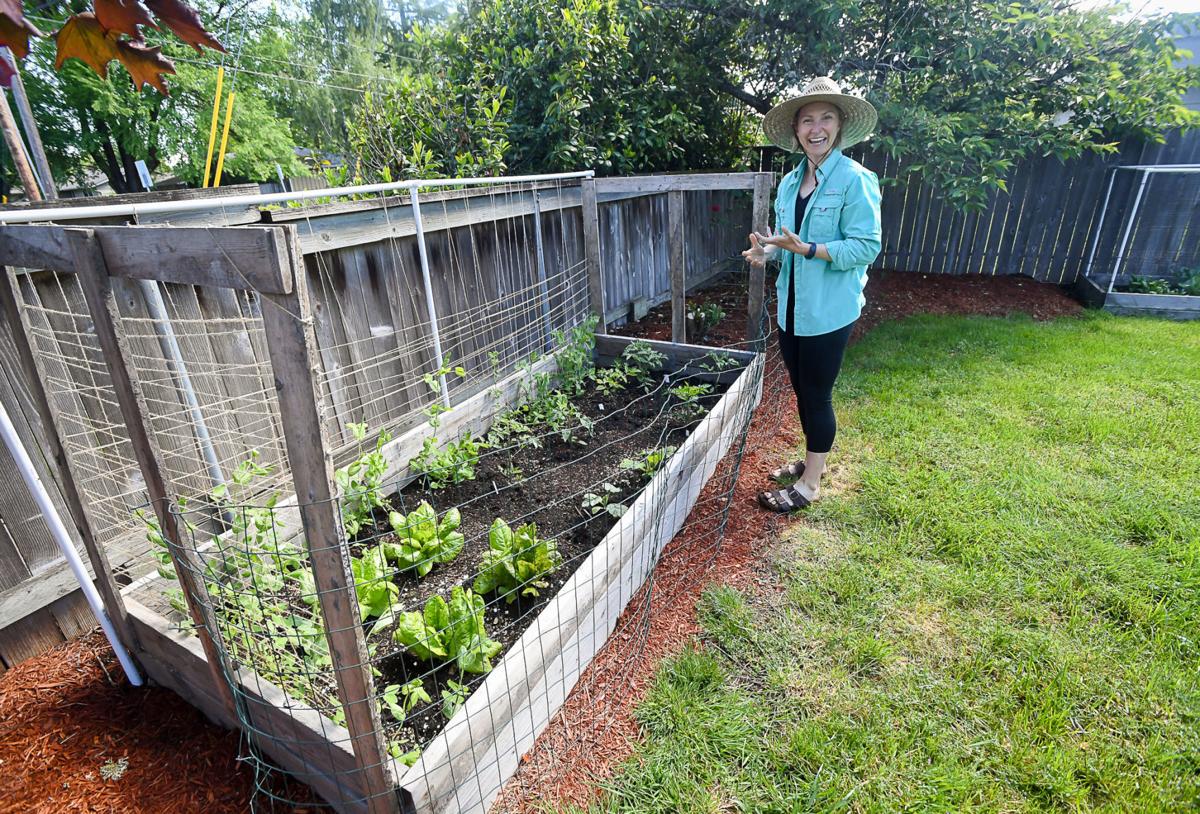 Christy Fitzpatrick checks on the garden she created during the COVID-19 quarantine. 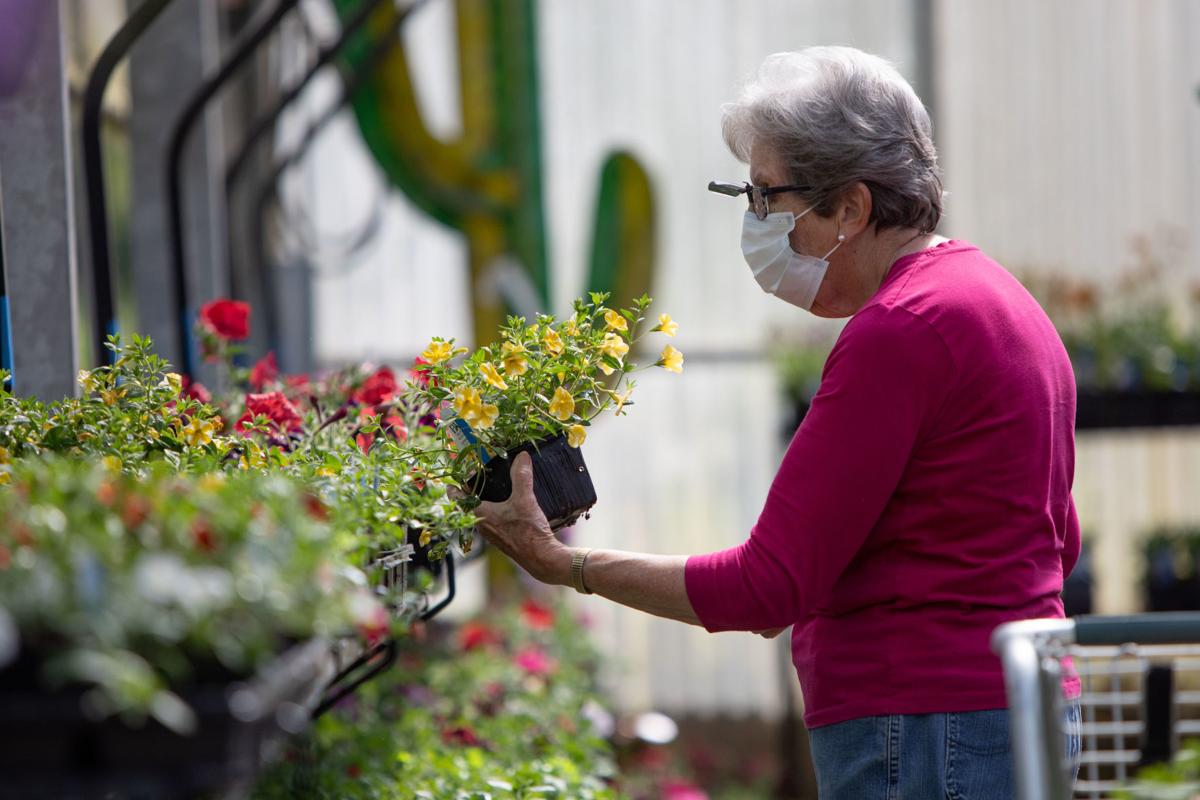 Customer Mary Ann Hansler peruses the plants for sale at Shonnard’s Nursery on Friday, May 29. 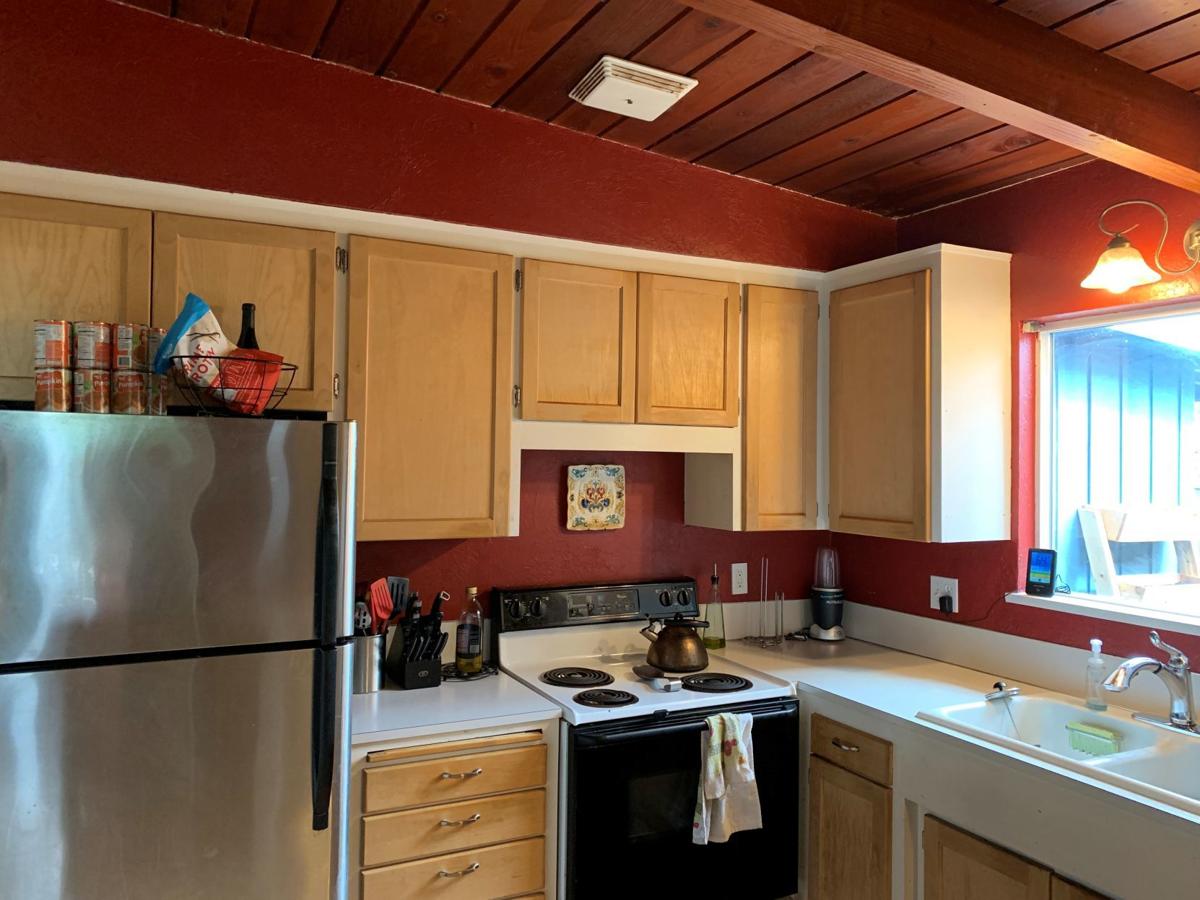 Corvallis resident Christy Fitzpatrick spent much of her work-from-home life during the pandemic remodeling her kitchen. This photo was taken before she got started. 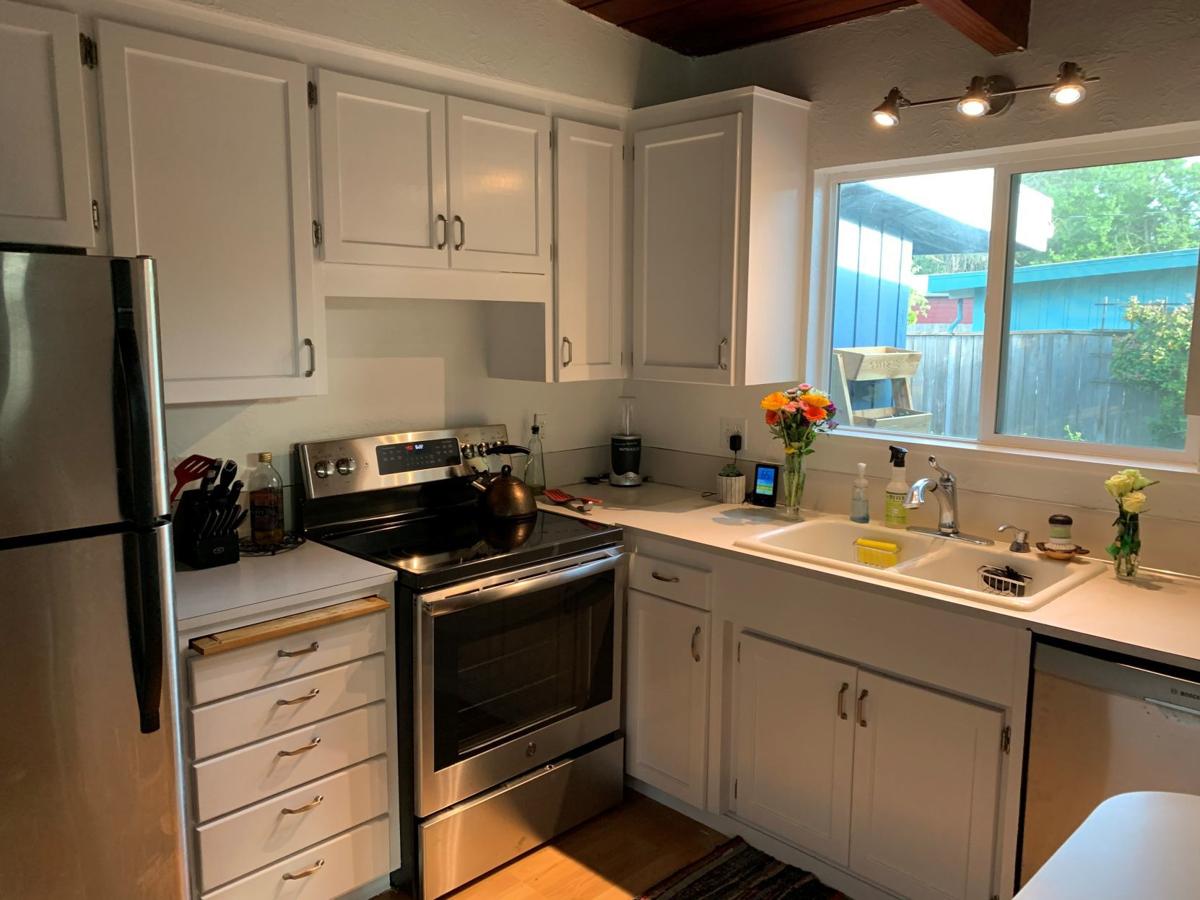 Corvallis resident Christy Fitzpatrick spent much of her work-from-home life during the pandemic remodeling her kitchen. This photo was taken after she finished it. 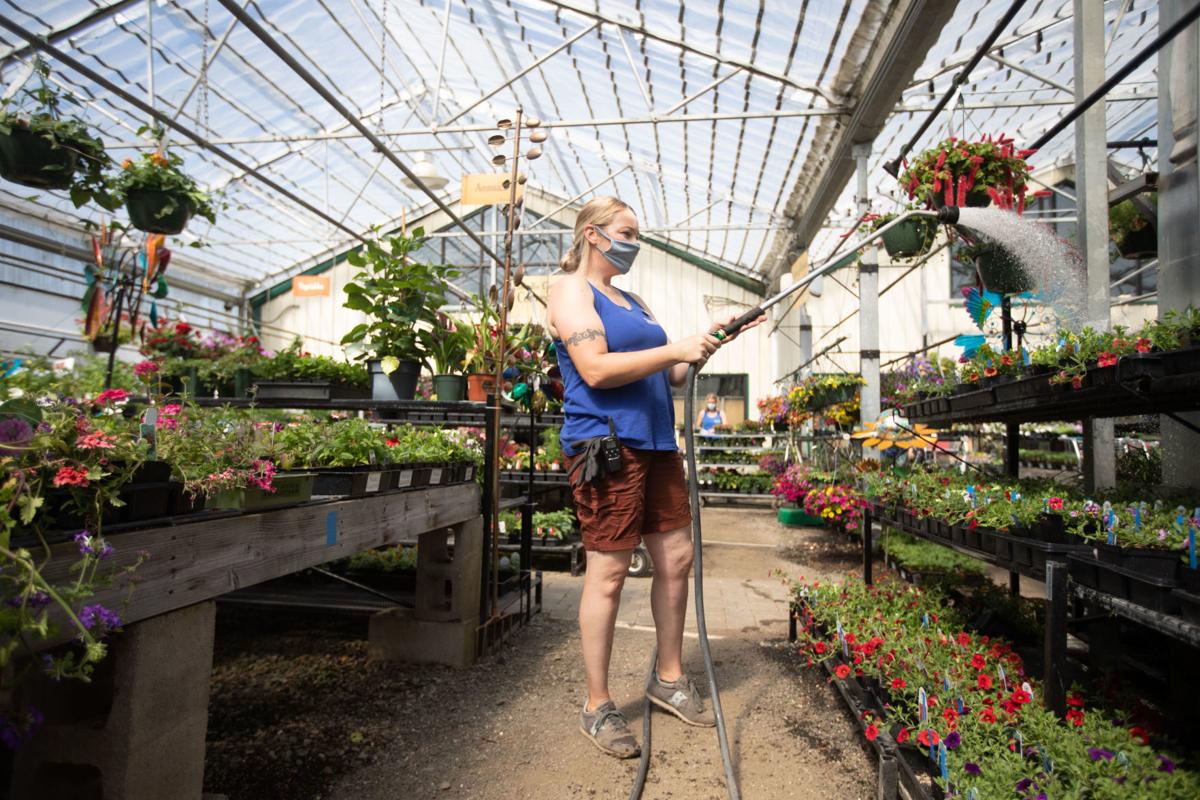 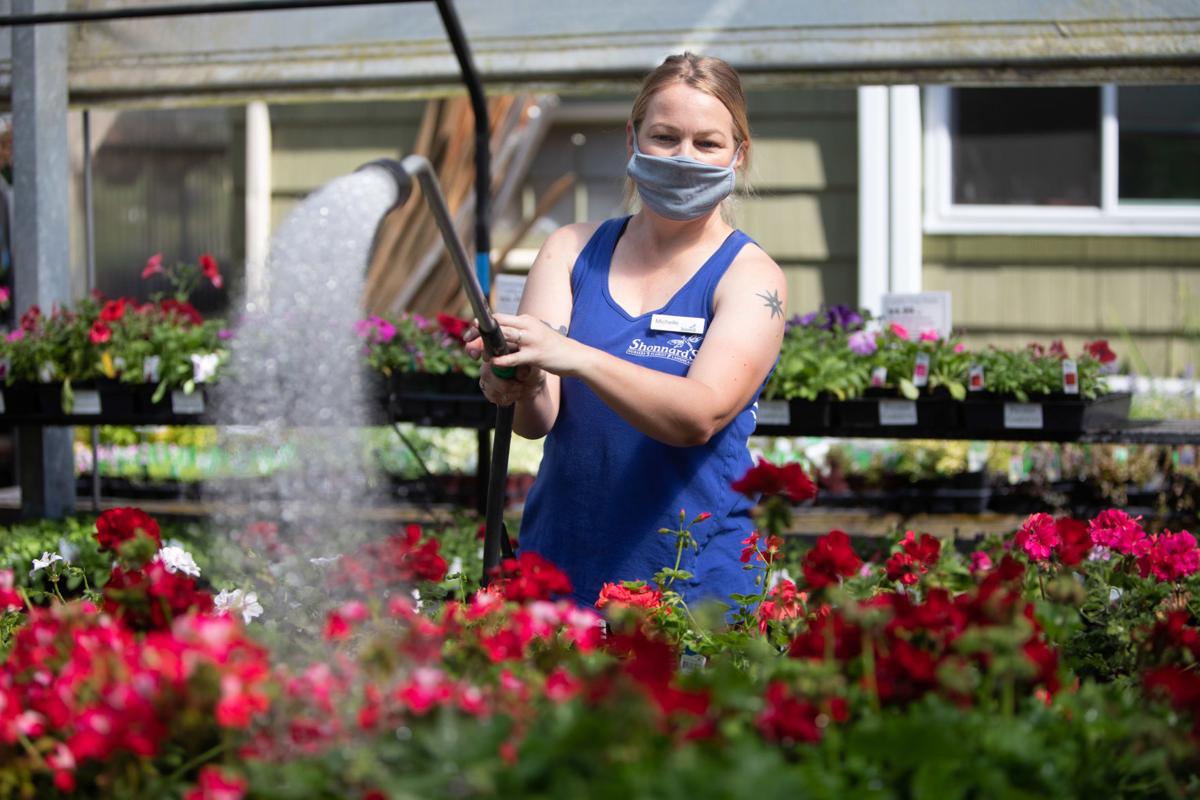 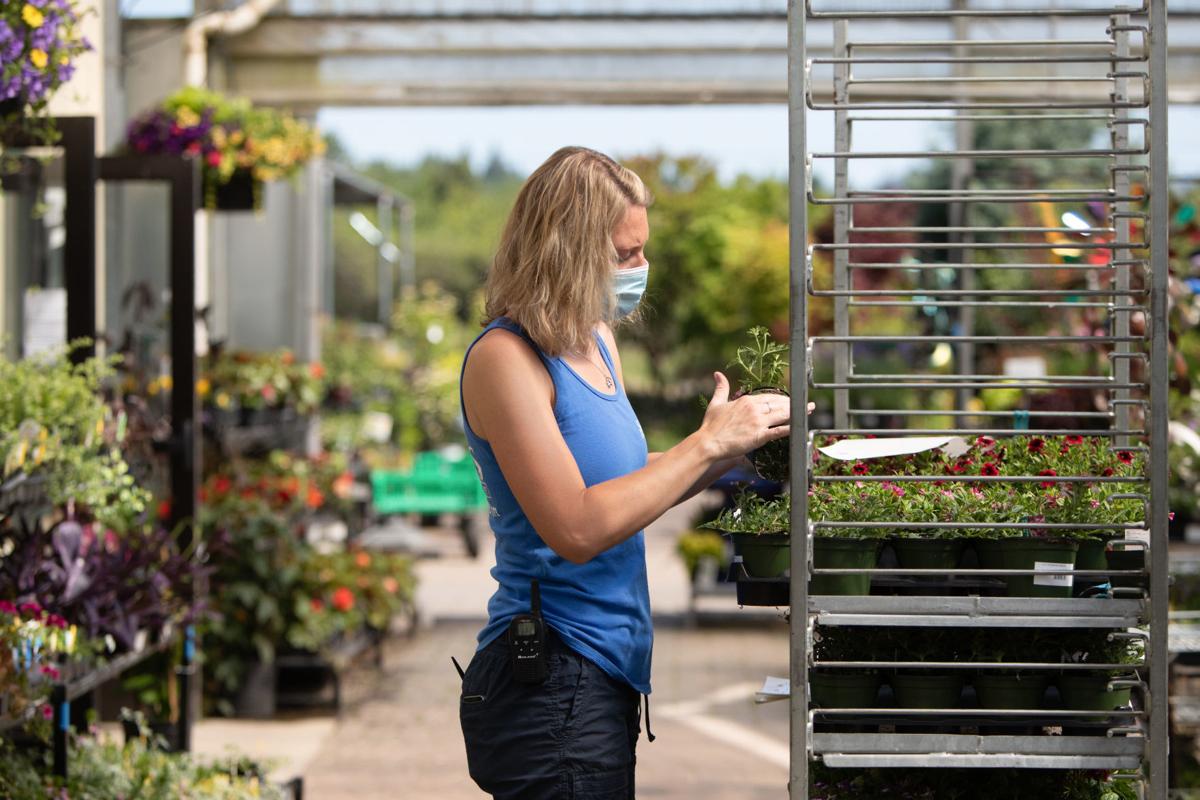 Colby Fisher, a manager at Shonnard’s Nursery, stocks plants at the nursery on Friday, May 29.

Now she’s the proud creator of a “quarantine garden.”

“I started all the gardening stuff pretty much as soon as we went into quarantine,” she said.

Since mid-March, the Albany Options School teacher has built five raised garden beds — three of them from repurposed wood she took off a neighbor’s hands. In the span of a few weeks, she’s planted an apple tree as well as blueberry and raspberry bushes and started some seeds for flowers.

Between teaching from home, leading online exercise classes for her second job at The Shop and gardening, she’s also updated her kitchen and repainted the majority of her house.

“I wake up at 5 a.m. and go,” Fitzpatrick said. “I’ve been staying really busy, and it’s kept me in really good spirits. It’s nice to have these projects that keep you going — it makes the days go by a lot quicker.”

Nationwide, many home improvement stores, plant nurseries, appliance shops and more have remained open as essential businesses during the COVID-19 pandemic. In the mid-valley, lumber stores like Spaeth’s in Corvallis, gardening shops like Shonnard’s in Philomath and hardware hubs like Hoy’s in Sweet Home have been bustling.

That’s in addition to chains that remained open, including national giants Lowe’s and Home Depot and Pacific Northwest favorites like Bi-Mart, as well as recently reopened craft stores like Hobby Lobby and Michaels.

Fitzpatrick said she’s been taking full advantage of buying locally and dedicating downtime to “stuff that I haven’t been able to normally do.”

For her new appliances, she enlisted the help of Stover, Evey and Jackson Inc. in Corvallis.

The owner, Matt Gentle, said he’s seen a difference in sales since the pandemic began: rather than up or down, business has been “different” because of the situation.

“We have seen an uptick in appliance sales,” he said. “A lot of it has to do with, obviously, people being at home.”

But, he said, certain appliances have been difficult for his business to get its hands on due to supply chain issues.

“It started with freezers (when) people got the idea that they should stock up on food,” Gentle said. “That already put pressure on business, and then meat plants started shutting down and it went absolutely crazy. They’re trickling in, but everybody wants them.”

Gentle added that since the rate of people cooking at home has risen, older appliances aren’t making the cut anymore. And, despite physical distancing measures, it’s hard for people to feel comfortable making a major investment online.

“There are a lot of different ways to buy anything without any social engagement at all,” he said. “But it’s hard to buy a $3,000 refrigerator without seeing it.”

Corvallis residents Daniel Sidder and his wife, Susie, had that issue when they ordered a new vent hood for their kitchen from Amazon. It came dented and defective, so they returned it and went to Home Depot instead.

They’d been meaning to replace some appliances and get quotes on a new fence for a while, he said. But with the risk of infection keeping the couple at home for the most part, they’ve had a lot more time to finally get the ball rolling.

“We’ve definitely started to ramp up our game,” Sidder said.

The couple is in the process of moving the fence in their backyard to enclose their garden and, like Fitzpatrick, they're updating their kitchen, too. Sidder, the development manager for Benton Habitat for Humanity, said he would have gone to the ReStore to buy and upcycle used items. Since his workplace is closed, he had to get more creative on sourcing materials.

“Luckily we were able to recycle a lot of the things we already had,” he said.

Other than that, Sidder said, they were able to get painting supplies from the Sherwin-Williams store in Corvallis, order hardware from an online vendor and go to Home Depot. They’ve since sanded, repainted and installed new knobs on their formerly bleak 1970s kitchen cabinets and installed a new sink along with the vent hood for a more modern look.

The couple would usually enjoy getting outside to bike or socializing with friends, especially since the weather is getting nicer. But, without as many obligations recently “that just fill up the week and the weekend," Sidder said, "we’ve really just had time to work on projects together.”

“The workday has kind of evolved,” Sidder added. "(Otherwise) I don’t think (these projects) would have gotten done in this timeline.”

On the other hand, with recent holidays like Easter and Mother’s Day, many locals have been looking for projects to keep themselves busy and their families happy.

“This year our garden and paint department sales have done well, but the rest of the categories, the sales have been flat,” said Greg Mahler from Hoy’s Hardware. “Overall our store sales are down a little compared to last year, but we were able to keep our business open and stay in business. The citizens of our community have been phenomenal and supported all of the local businesses during these difficult times.”

Lynnette Shonnard, owner of Shonnard's Nursery, Florist and Landscape near Philomath, said business has been so good, she’s even given her staff pay raises.

“We’re definitely up, and we’ve had more traffic than we’ve ever had before,” she said.

Not only are her usual customers frequenting her shop, but also brand-new gardeners and seasoned folks who aren’t comfortable going back to the supermarket yet.

“We definitely have had an overabundance of that,” Shonnard said. “Usually when we get into the month of April, it’s easy sailing for us. But now we have that percentage of customers who are completely brand new. It’s more of an eye-opener.”

Despite shortening hours to clean more often and canceling in-store gardening lessons, she said, sales have risen by up to 25%.

“Everybody was just so happy we’re here,” Shonnard said. “They’re happy they could get some of their stuff done."

Gentle said he noticed that, nationally, prices have been rising to reflect the sudden and rushed interest in home improvement, “but that always comes back to bite them.”

“I think people around here understand that value of keeping their money local,” he said. “People really want to give a local dealer or a local retailer a shot because they know that in the long run it helps everybody here.”

After all, Gentle added, “This is uncharted territory. Nobody knows how this story is going to end.”

In the woods of North Albany, a creature was born.

Lux + Lu, a new women’s clothing boutique, opened up in downtown Albany earlier this month and has seen tremendous support from the community,…

Christy Fitzpatrick checks on the garden she created during the COVID-19 quarantine.

Customer Mary Ann Hansler peruses the plants for sale at Shonnard’s Nursery on Friday, May 29.

Corvallis resident Christy Fitzpatrick spent much of her work-from-home life during the pandemic remodeling her kitchen. This photo was taken before she got started.

Corvallis resident Christy Fitzpatrick spent much of her work-from-home life during the pandemic remodeling her kitchen. This photo was taken after she finished it.

Colby Fisher, a manager at Shonnard’s Nursery, stocks plants at the nursery on Friday, May 29.