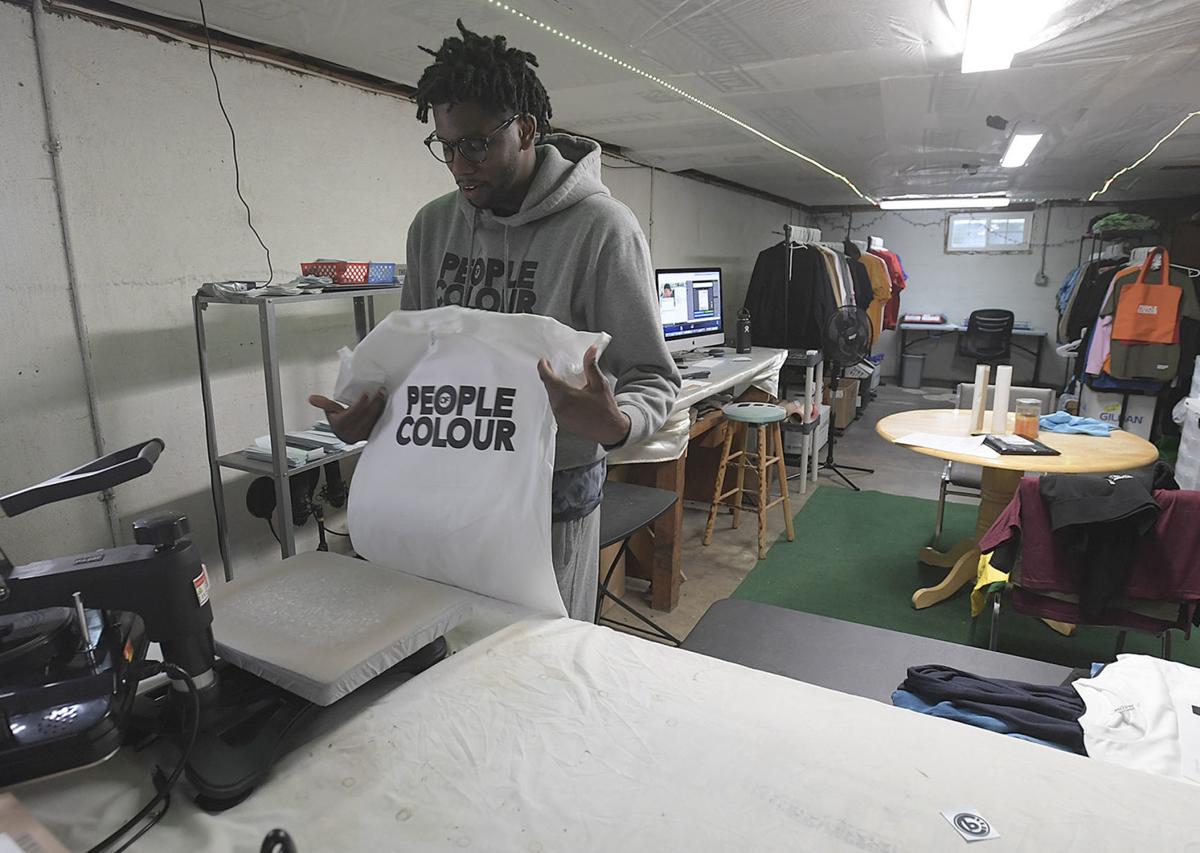 Darius Northern produces a shirt in his Corvallis basement. The Oregon State grad's People of Colour clothing brand is taking off amid a resurgent Black Lives Matter movement. 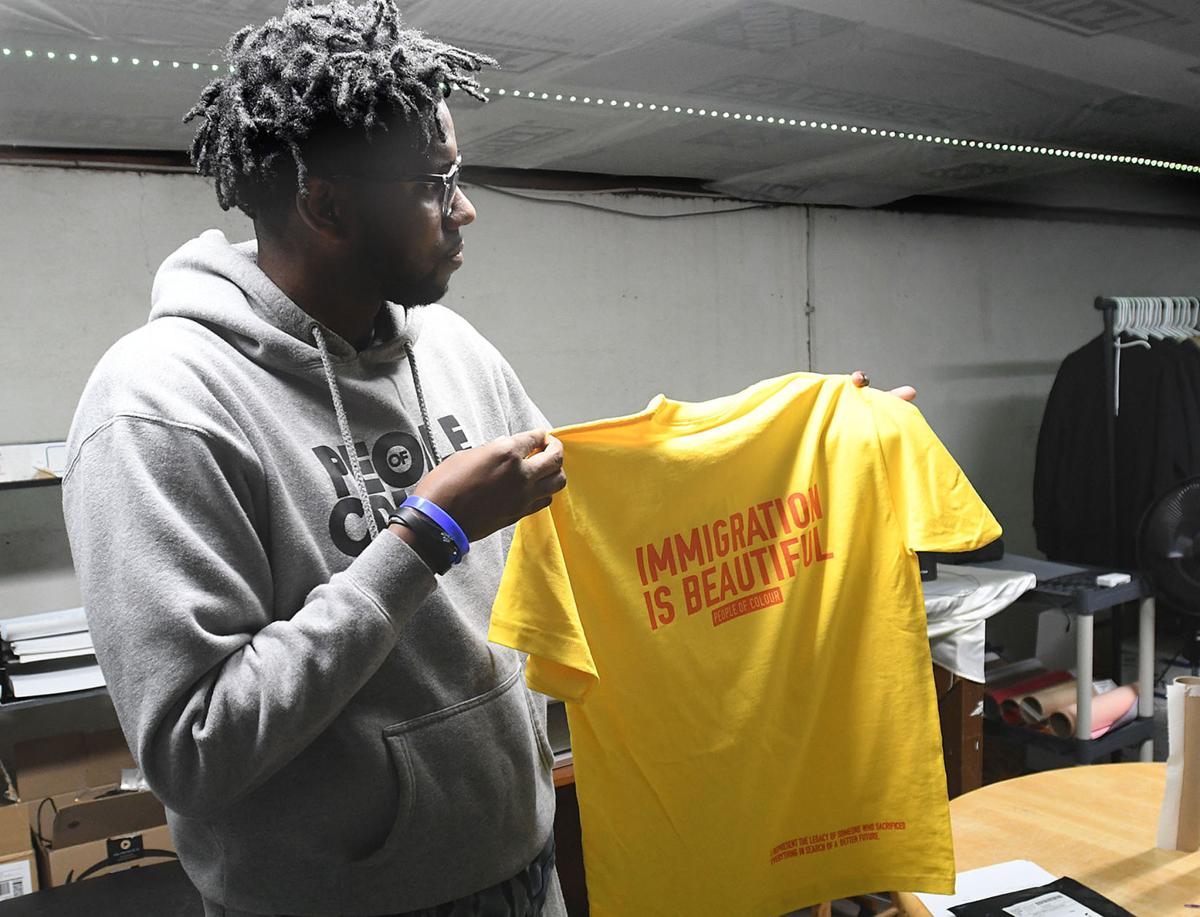 Darius Northern said that one of the most popular shirts for his People of Colour clothing line says "Immigration is beautiful." 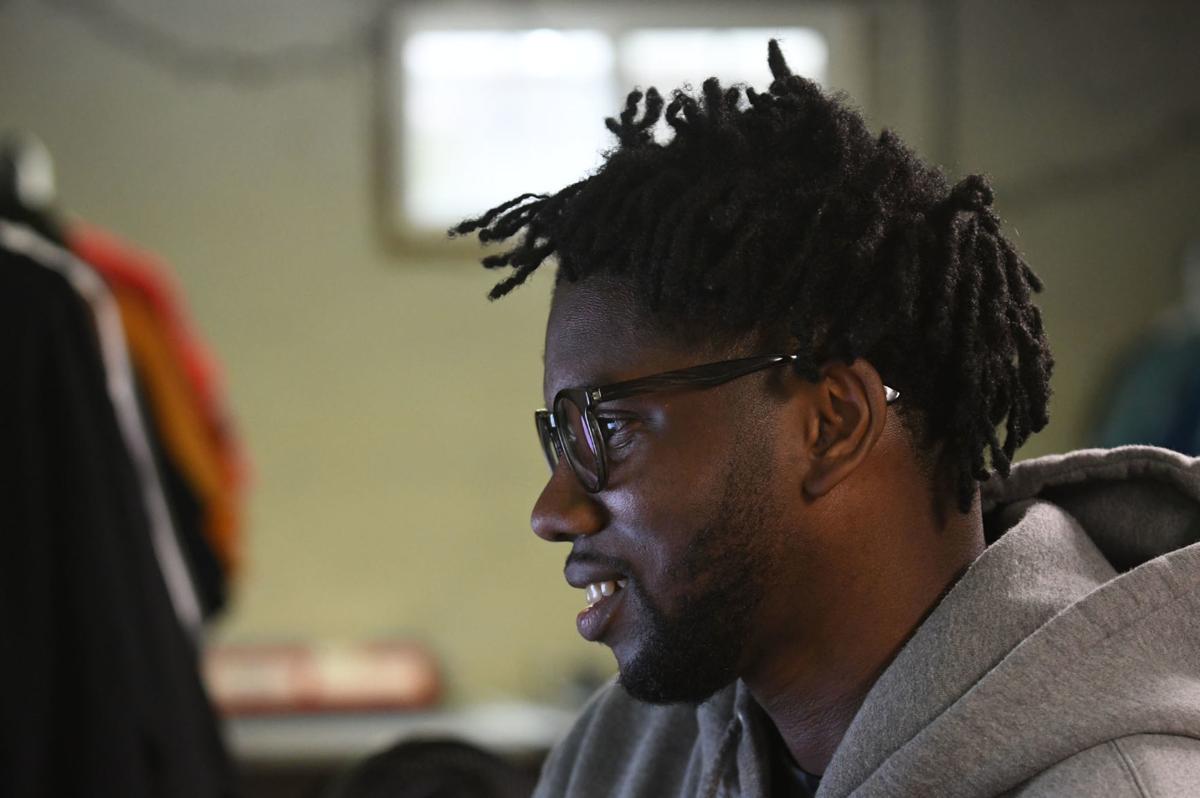 Northern's People of Colour clothing line has been gaining traction, with supporters purchasing items from throughout the country. 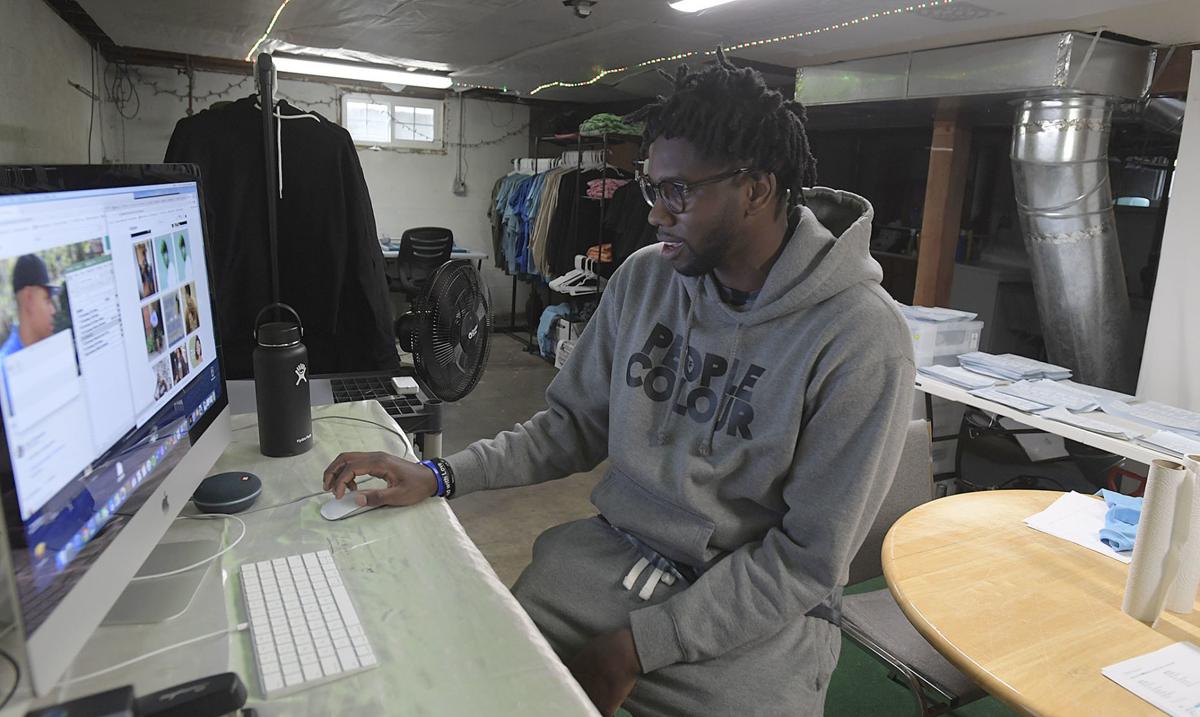 Northern's clothing line may be outgrowing the basement of his Corvallis home.

Corvallis resident Darius Northern and one of his cousins have an ongoing joke: If one of them says something thought-provoking, the other responds, “Put that on a shirt.”

Northern’s clothing brand, People of Colour, does just that.

Some of his garments are didactic in nature.

“How are you lifting your voice to aid in the dismantling of racism and discrimination?” one design asks. “Do you harbor thoughts and/or display actions that covertly perpetuate racism?” queries another.

Other garments are there to make a statement.

The May 25 death of George Floyd, the March 13 death of Breonna Taylor and other Black lives lost to police brutality in the U.S. inspired Northern, a Black man, to make pieces that would encourage others to check their biases.

“The clothing brand basically started out of frustration,” said Northern, an Oregon State alum. “I was looking for a cathartic activity in fashion, in creativity.”

Since selling his first hoodie in 2018, that catharsis has spread. Mid-valley residents have been spotted at local Black Lives Matter protests wearing the People of Colour brand and, Northern said, being “walking billboards of awareness” throughout the community.

“One of the cool elements about the People of Colour clothing brand,” he said, “(is) you are a walking conversation piece. You might be engaged in some productive discourse as it relates to the message on the clothing.”

The People of Colour operation has grown substantially since Northern graduated from OSU last summer. He’s gone from taking orders through social media messaging and enlisting the help of a local print shop to launching a brand website and fulfilling orders himself with equipment in his basement and the help of two assistants.

All but one of the people Northern has hired so far to expand his brand have been women.

His website, peopleofcolourclothing.com, also houses episodes of Northern’s "Color Reimagined" podcast, in which he discusses what it’s like to be a person of color in the U.S. with his peers of different ethnicities.

After moving to the Pacific Northwest from Nashville, Tennessee, Northern said he was excited to be outside of his comfort zone. He wanted to study horticulture in Oregon’s lush environment as well as live in what he believed was a less racist region of the country.

What he found during his studies in Corvallis and service in the Oregon Air National Guard was more insidious than he could have guessed.

“When we think of Oregon on the East Coast,” he said, “we think of everyone being inclusive — and Oregon is that. I don’t want to take away from that. (But) when I came here, I thought I would literally have a break of being Black. Now I know I was incredibly naive to think that.”

In 2017, 1% of the student population at OSU was Black. Northern was one of them. People assumed he was an athlete, he said. Some, he added, were “looking at me like they hadn’t seen a Black person in days.”

He recalled standing in line at a restaurant once and seeing an entire seated party staring at him.

“I was thinking, ‘I wish I could give y’all something to look at.’”

Now people can stare all they want at the back of Northern’s clothes. That’s the point, he said.

“The ethos of my brand is to create awareness and generate conversation,” Northern said. “I ask a lot of provocative questions on the back of my garments. With my brand, a lot of times white fragility does emerge.”

But it’s not meant to shame white people, he said. Rather, it’s meant to challenge the latent biases that many seem to have.

“I did my research on Oregon,” Northern said.

He read about the exclusionary laws embedded in Oregon’s state code when it was admitted into the Union in 1859. He learned of the high rates of Ku Klux Klan membership among Oregonians in the early 20th century.

“I’ve had my most egregious, overt, ‘What the heck?’ moments here in Oregon,” he said. “And, once I understood the racial history of Oregon, I understood why Oregon is the way that it is today.”

Since starting his brand, however, Northern said “it’s been all love.” Aside from one anonymous naysayer on social media, he said it’s been humbling to see the outpouring of support — and orders — his brand has gotten since the reemergence of the Black Lives Matter movement this year.

Hopefully, he said, he can grow his brand to the point where he can become a nonprofit, hire more women of color to run the business and finally get back to his original dream of creating green spaces in low-income neighborhoods to “make gardening cool.”

This time last year, Northern said, he maybe sold a few T-shirts or hoodies a week. Last month alone, he made around $30,000.

Professional athletes, rappers, social media influencers and other public figures around the world have reached out to Northern to ask how they can help spread awareness of his brand.

“That’s all a testament to people waking up … and taking activism seriously,” he said. “That’s really dope to see. It’s like, ‘Where has this energy been this whole time?’”

Northern said it’s bittersweet to know that it took more Black people dying to spark his business and for people to raise their voices against injustice. He wants more people — especially non-Black people — to question their biases.

“I want to plant that seed in your subconscious,” he said. “When you’re laying in bed at night going over your day, I want you to think about my shirt.”

Corvallis resident addresses rotary club on history of racism, how to be better allies

Although Oregon has a reputation for being a more liberal state, one Corvallis native said Oregonians still have much to learn and a lot to be reminded of when it comes to the racial history of the U.S.

If you borrowed a life vest from one of the kiosks in Lebanon, the Lebanon Fire District has a question: Can they have it back?

Darius Northern produces a shirt in his Corvallis basement. The Oregon State grad's People of Colour clothing brand is taking off amid a resurgent Black Lives Matter movement.

Darius Northern said that one of the most popular shirts for his People of Colour clothing line says "Immigration is beautiful."

Northern's People of Colour clothing line has been gaining traction, with supporters purchasing items from throughout the country.

Northern's clothing line may be outgrowing the basement of his Corvallis home.