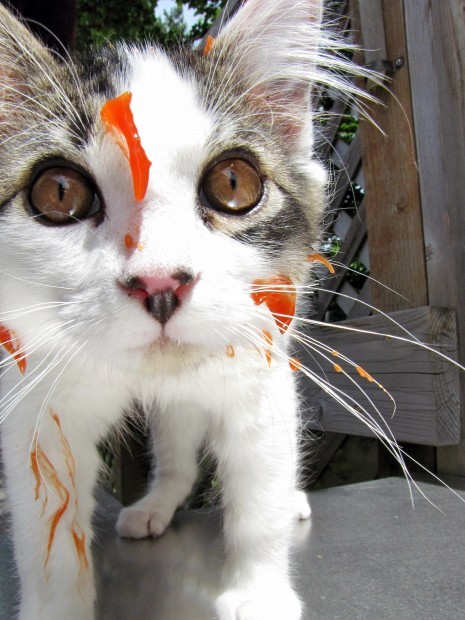 No cats were harmed in the making of this zombie. Some ketchup may have been. 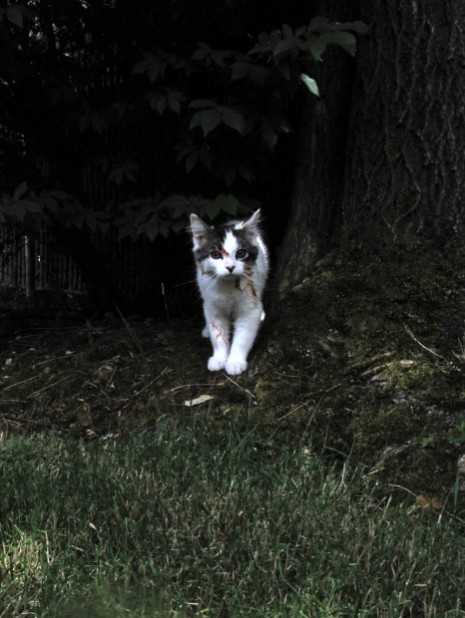 Have you ever seen a cuter zombie? No, you haven't.

There are two kinds of people in the world: Those who like zombies, and those who don’t. There is no middle ground.

I’ve always been on the latter side of the great divide. Not to sound like a 6-year-old whining about broccoli, but zombies are gross. I avoid gross things.

And zombies eat brains, right? I’m rather attached to my brain! Why have I spent my life taking care of my gray matter — you know, doing crosswords, wearing helmets and avoiding football — if it’s just gonna end up as some undead creep’s dinner anyway? If that’s the case, I might as well listen to heavy metal, drink pesticides and enjoy life while I can.

Sure, I’ve read all those scholarly articles about how zombie stories allow us to explore a bunch of existential themes and ethical questions, blah blah blah. But I’ve always preferred my existential explorations without any broccoli. I mean zombies.

I never thought a show with elaborately nasty makeup and without Don Draper would interest me, yet “The Walking Dead” made me kinda sorta like zombies. My roommate tricked me into watching the pilot one rainy winter Sunday, and we ended up watching the whole first season that afternoon.

So I guess I’ve experienced a mid-life conversion to The Other Side. Count me in, Team Zombie.

But the question here is not whether I spend too many hours watching television, but whether this gross-but-existentially-rich pop cultural phenomenon has any grounding in Possible Real Life. Could some virus or drug turn us into flesh-hungry incorrigibles?

Zombie lore has a few weird, non-disease-related explanations for how the creatures could come to be, like reanimation of the dead via sorcerous rituals or freaky science, a la Frankenstein’s monster.

Today’s mainstream zombie fiction largely relies on disease, though. A horrific pandemic, organic or manmade. Either one that makes everyone over-stimulated, violent and maniacal, like a dog with rabies, or one that damages or destroys most brain functions, except the most basic impulses to eat and, you know, moan ominously.

The extreme rabies idea seems kind of hokie to me. This isn’t an episode of “The Office”; I’m not worried about rabies awareness. We all know to avoid wild animal bites and get shots when we don’t, right? Rabies is NBD, as the kids are saying these days.

Then again, rabies is real, can infect humans and has adapted before. Like there was that adaptive bat rabies strand in Arizona a couple years ago that unexpectedly spread to foxes and skunks. (Zombie skunks! Could the apocalypse be any cuter?)

And just this week, Oregon has confirmed a case of bat rabies. Who knows, maybe it’s going to mutate into a super variant of the rabies virus and zombify us all! In which case your life is basically going to turn into the last 15 minutes of “Old Yeller,” having to kill beloved friends gone rabid. Stock up on Kleenex now.

Of course, rabies is not the only purported threat. Other existing viruses, like measles, could mutate. (No word on whether its milder cousin, fifth disease, is a danger.) Authors and scientists have also made up theoretical infections like Ataxic Neurodegenerative Satiety Deficiency Syndrome and the solanum virus that would damage the brain in such a way as to induce zombie-like symptoms and behaviors.

So scientifically speaking, a zombie-making virus is possible.

But since it thus far hasn’t come to fruition, I am working within imaginary parameters here. For the sake of my next few weeks of preparation, I am assuming zombies:

• would be capable of basic movements (pushing a door open or walking),

• would not be capable of complex, purposed movements (climbing a tree, using a screwdriver, jitterbugging),

• would not have advanced intelligence (speaking, strategizing, problem solving), and

• would spread infection through bites or fluids (no airborne threat).

Obviously, survival would depend on avoiding infection and the infected. As with any pandemic, getting away from centers of population will be key.

But at some point during the zombie apocalypse, you will encounter some zombies, and you will have to escape or defeat them.

Sure, zombies are gross, but they are not that scary. They’re slow and they’re driven by predictable impulses.

Anyone with half a brain can outsmart them.

Copy editor at the Democrat-Herald. I like cats and the end of the world.

No cats were harmed in the making of this zombie. Some ketchup may have been.

Have you ever seen a cuter zombie? No, you haven't.