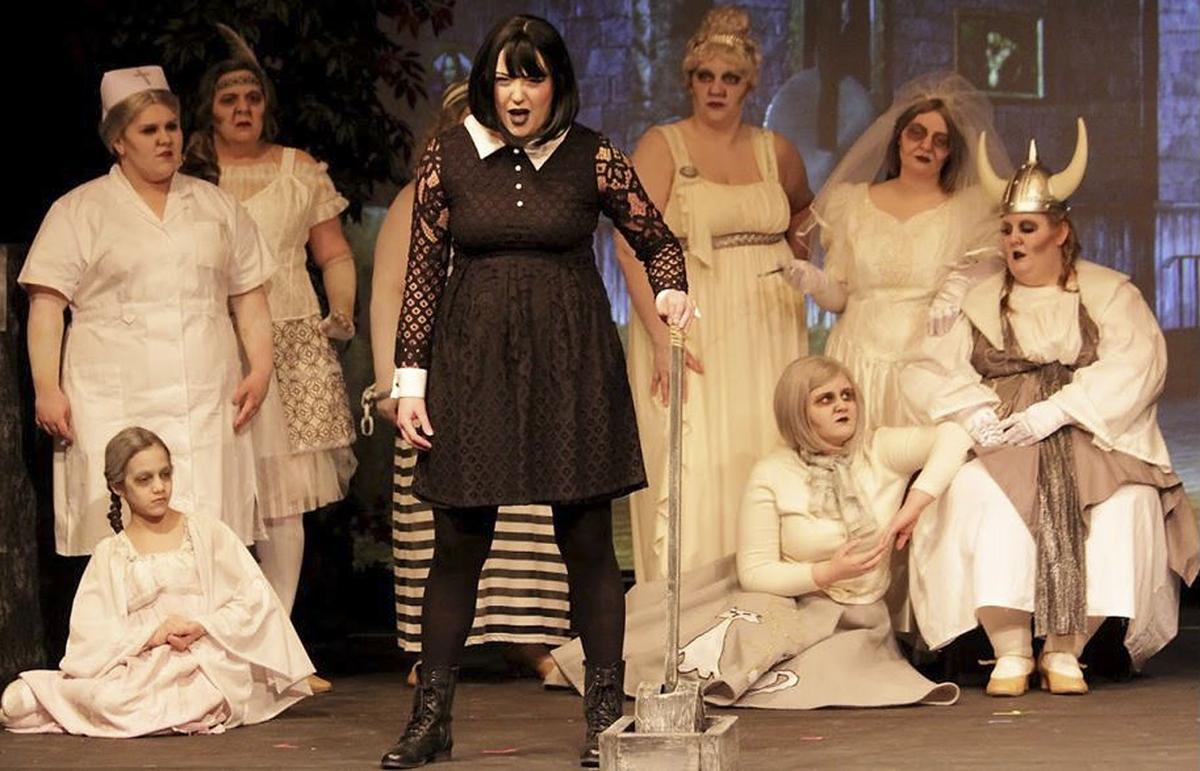 Wednesday (Emily Dale), surrounded by ancestors of family members, wonders why she can't be part of a "normal" family in this scene from "The Addams Family." The musical comedy debuts Friday at the Albany Civic Theater. 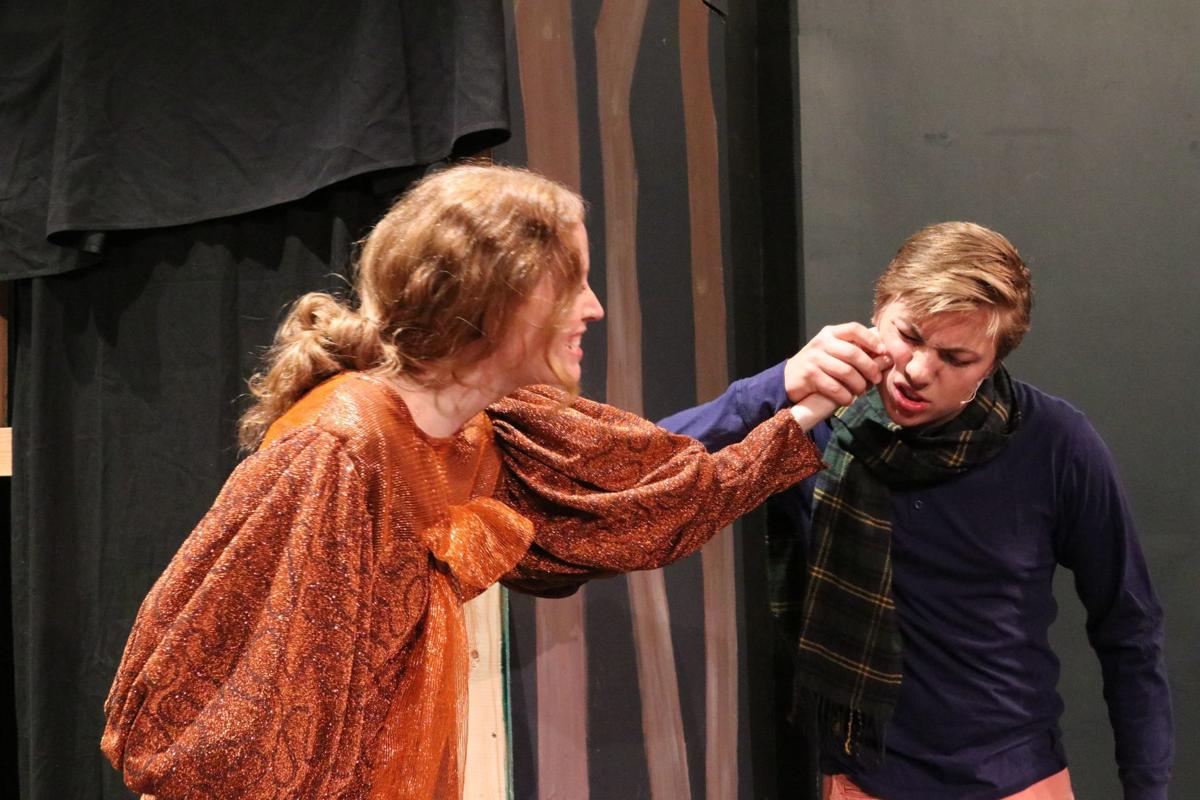 Jack's mother (Christa Kepshire Antrim) punishes Jack (David Lake) for what she believes is a foolish mistake in "Into the Woods." 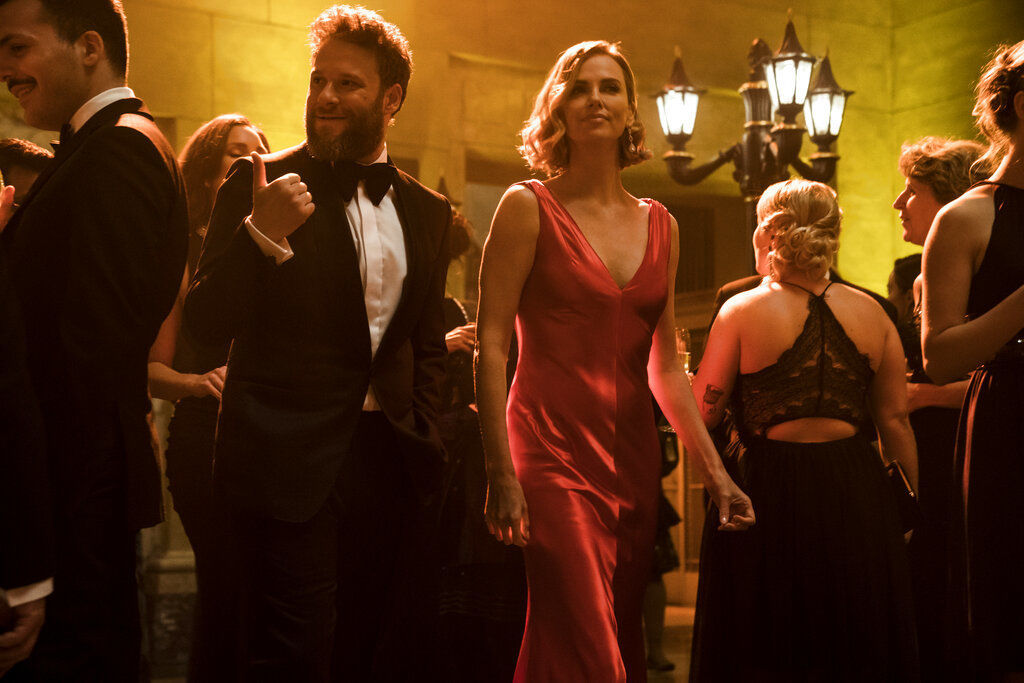 Seth Rogen, left, and Charlize Theron star in "Long Shot," opening at the Regal 7 in Albany and AMC 12 in Corvallis.

It's the first weekend in May, and that means spring musicals are blooming all over the mid-valley: Both the Albany Civic Theater and the Majestic in Corvallis are debuting their big seasonal musicals.

At the Albany Civic, the curtain rises Friday on its production of "The Addams Family." You can read Jennifer Moody's fun preview story about the production by clicking here.

The mood is a little more somber at the Majestic, which launches its production of "Into the Woods," the classic Stephen Sondheim-James Lapine musical, on Friday. Click here to read my preview story about this ambitious production. And I appreciated director Johanna Spencer's forthright advice to parents about whether the show, inspired by fairy tales, is appropriate for young children: No. (There's a reason why the junior version of "Into the Woods" — yes, there is such a thing — just simply omits the second act entirely.)

I know what you're thinking: How is it that the mid-valley's biggest community theaters have managed to schedule their big spring musicals at pretty much exactly the same time? Well, first, it is true that scheduling these extravaganzas can be tricky (and it's probably not a coincidence that both shows launch during Family Weekend at Oregon State University). But I also heard that several of the area's leading theatrical companies recently have formed a Mid-Valley Theater Alliance so that they can talk to each other and have a chance to head off these scheduling conflicts. All I can say is, good luck with that.

If you're not in the mood for musical theater this weekend, let me suggest a dose of jazz: Eugene's Emerald City Jazz Kings will be swinging by OSU's LaSells Stewart Center at 7:30 p.m. Friday for "Cheerful Little Earful," a tribute to the songs of lyricist Al Dubin and composer Harry Warren. Don't think you know any of their songs? Trust me: You do. These are the guys who wrote "Tip Toe Though the Tulips" as well as "Chattanooga Choo Choo," "I Only Have Eyes for You" and many other classics.

Choral music seem like a better bet? Then head over to Lebanon Sunday afternoon to check out the Lebanon Community Chorus in action: Director Ray Hendricks will lead the singers in a show designed to take audience members to far-flung "Destinations."

Classical music fans may want to check out the mid-valley's Arioso Chamber Players pair of concerts this weekend: The trio performs Saturday night in Albany and Sunday afternoon in Corvallis. On the program: works by Haydn, Kahn and Chausson.

Did you miss it last year when mid-valley writer John Larison read from his buzzy Western novel, "Whiskey When We're Dry?" You're in luck: He's reading again Friday at 7:30 p.m. at OSU's Valley Rotunda. It's free. Here's my profile from last year about Larison, whose book may be on the way to the small screen.

Just want to catch a flick this weekend? Let's assume for the time being that you've already seen "Avengers: Endgame," but here's Justin Chang's spoiler-free review from the Los Angeles Times.

"Endgame" is still clogging mid-valley screens, but a couple of new releases caught my eye: "Long Shot," the Charlize Theron-Seth Rogan romantic comedy (and one of my picks for summer 2019 movies that are suitable for adults) is out this weekend, and drew a warm review from Katie Walsh.

Over at the Darkside Cinema in Corvallis, adventurous moviegoers might want to check out "High Life," the unsettling new sci-fi flick from French director Claire Denis starring Robert Pattinson. It's not typical sci-fi fare: We had to trim Chang's review for the print edition of The E, but it's worth your time to check out the full-length piece, which you can do by clicking here.

Speaking of "Endgame" spoilers, we heard from a clerk at a local grocery store about some jerk who wrote down how the movie ends and left the note on a deli counter, where customers could see it but the store's staff could not. Let's be honest: That's tacky. But it raises this question: How long does a movie or TV show have to be out before spoilers are OK? A week? A month? Two months? Never? I might pound out a column on this topic, but let me know what you think by sending me an email: mike.mcinally@lee.net. Put "Spoiler Alert" in the subject line, but leave your actual spoilers to yourself.

Wednesday (Emily Dale), surrounded by ancestors of family members, wonders why she can't be part of a "normal" family in this scene from "The Addams Family." The musical comedy debuts Friday at the Albany Civic Theater.

Jack's mother (Christa Kepshire Antrim) punishes Jack (David Lake) for what she believes is a foolish mistake in "Into the Woods."

Seth Rogen, left, and Charlize Theron star in "Long Shot," opening at the Regal 7 in Albany and AMC 12 in Corvallis.