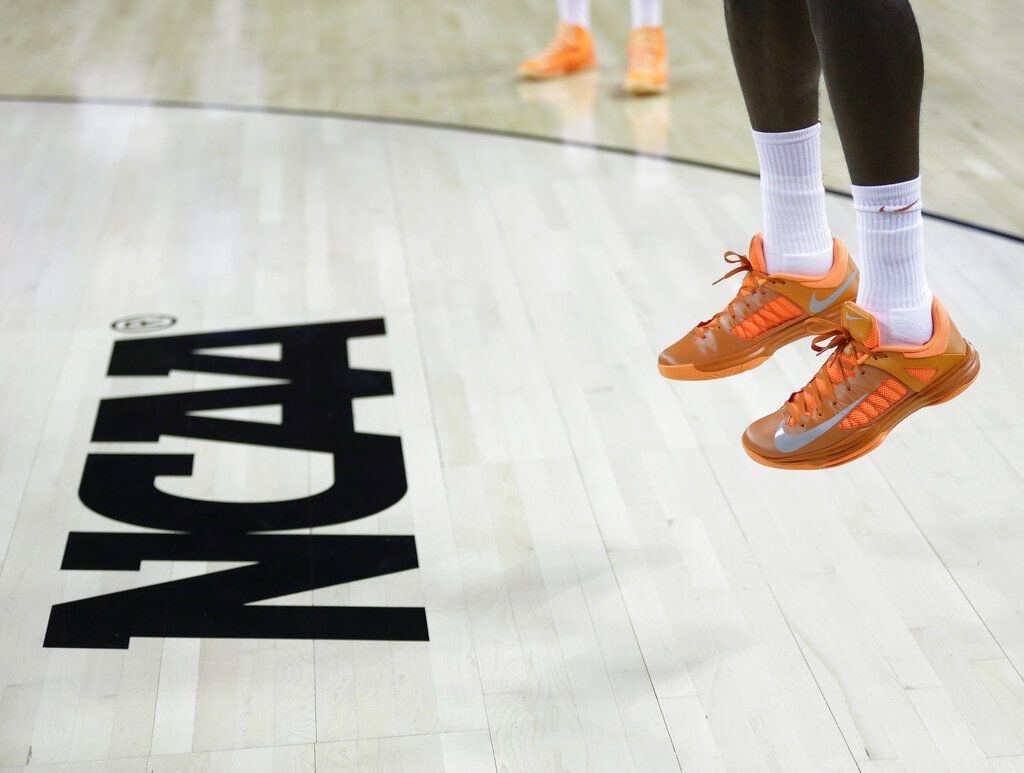 California has passed a law allowing college athletes to sign with agents and take on endorsement deals. The NCAA opposes the concept, which some say will inject too much money into an enterprise already awash in it. 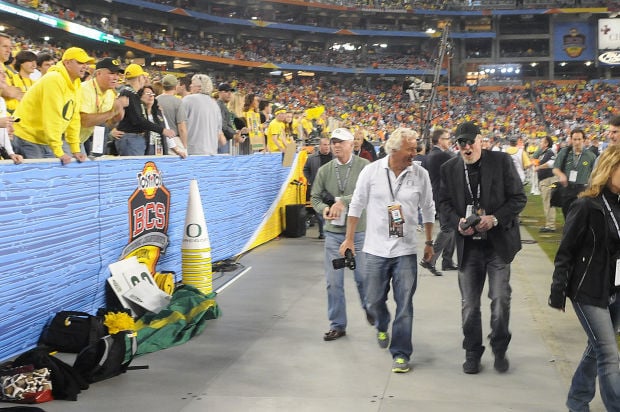 Nike founder Phil Knight, right in black, walks the sidelines before Oregon's national title game appearance against Auburn on Jan. 10, 2011, in Glendale, Arizona. If California's new law on athlete endorsements is implemented in Oregon it would dramatically increase Knight's ability to ... influence events.

California has a new law that allows college athletes to hire agents and sign endorsement deals.

This is a mind-bogglingly stupid idea.

First, some background. Yes, college and universities at the Power 5 level (of which there are precisely four in California) reel in millions of dollars in revenue from athletics. But they spend the same millions of dollars, a lot of it because of Title IX requirements that women’s teams get a fair shot. NO California college or university is making HUGE PROFITS off of athletics. And please keep this in mind as you read the following: College sports are awash in cash. Is it really a good idea to throw more money at it?

Second, let’s look at the goals and benefits of such a system, as stated by its creators/backers (all information from the Associated Press story by Adam Beam that was made available to newspapers Sept. 30).

Statement: California Governor Gavin Newsom and others cast the bill as an attempt to bring more fairness to big-money college athletics.

Reality: Fairness. Right. Who is going to benefit from this law? Only football and basketball athletes at UCLA, USC, Cal, and Stanford. NOBODY is going to sign the Azusa Pacific goalkeeper to do a car ad.

Statement: Universities are getting rich off the backs of athletes — often, black athletes struggling to get by financially.

Reality: As noted above universities are NOT getting rich off of athletes. Plus, Cal, Stanford, UCLA and USC arguably are in the top 30 or so of major research universities in the U.S. and can pose academic challenges for students, regardless of their ethnicity and socio-economic background. Adding agents and endorsement contracts to that mix seems almost criminal. The most expensive of those four schools, Stanford, costs about $70,000 per year. That’s $280,000 over four years to acquire one of the most valuable educations available anywhere. College athletes already are tremendously well paid, and their scholarships are awarded to them, prior to admission mind you, by athletic departments with no competition from the rest of the student body for the funds. Athletes get special tutors at “success centers” and exclusive meal service. And if people are interested in the financial challenges of students why aren’t they crafting programs that will benefit all of them?

Statement: Athletes can't enter into deals that conflict with their schools' existing contracts. For example, if your university has a contract with Nike, you can't sign with Under Armour.

Reality: This is fabulous. I call it the Coach K rule. California positions itself as the state willing to go the extra mile to give student-athletes a path to income equity. How American and free market can you get!! Not exactly. They would love you to sign lucrative deals … as long as it’s with companies that already pay their coaches hundreds of thousands of dollars. There is an economic lesson there for any USC running back willing to attend class to learn it. Free market indeed.

Statement from the bill’s author, state Sen. Nancy Skinner of Berkeley: "For women, this might be the only time they could make any money."

Reality: Well, I suppose Skinner has a point with sports that offer limited professional options such as volleyball and softball. But soccer, basketball, track and field and gymnastics DO offer such options. Is there really that much money to be made out there by someone such as former OSU basketball star Marie Gulich while she was in college? And, remember, Skinner can’t mandate how the endorsement money must be spent. The people with the big bucks are going to go after football and men’s hoops. Is that fair? Doesn’t really matter.

Statement: Pro basketball star LeBron James, whose 14-year-old son is a closely watched basketball prospect in Los Angeles and will be 18 when the law takes effect, exulted over the bill, saying it will "change the lives for countless athletes who deserve it!"

Reality: The overwhelming majority of the lives that are being changed by attending college in America are those who go to class, get a degree and move on to a career that hopefully will make the nation a better place.

And what do you think will happen when James’ son arrives in college and is able to take advantage of the new law? He’s a celebrity, and because of that he will be showered with endorsement deals even though his family already has gazillions. Think Lonzo Ball at UCLA. Free market? Fairness? I rest my case.

I also think about what might happen if Oregon adopts such a law. Phil Knight could literally buy himself a football team. And what would Oregon State have to counter with? Potato salad.

I also think about Keith Brown, the Lebanon High linebacker who is being highly recruited. When this new law gets to Oregon does it mean that he and his family will be subjected to recruiting pitches from agents and endorsers IN ADDITION to college coaches?

It’s also intriguing to me that California is trying to shove this thing down the throats of private schools such as USC and Stanford that often, shall we say, have their own ways of doing things. That said you can be sure this puppy already has been heavily lawyered and its implementation date of 2023 will give the state time to tell Stanford why it must allow sports agents on campus to sign endorsement deals with its student-athletes. Or to get the NCAA to agree to it.

I also keep thinking of a couple of stories that I wrote this year about OSU students. One of them, engineering major Tim Slama of Salem, finished second in a contest to design a golf club. His prize? They paid tuition for his senior year. He thought this was a pretty cool deal. College had VALUE to him.

Then there is the fabled OSU Security Club, which keeps winning competitions. No special meals. No special training facilities or student success center to keep them eligible. And, it almost goes without saying that the work the OSU Security Club does battling cyber-hacking is a little more important to how the world turns out than whether someone can put a ball in a hoop.

Then there is everyone’s punching bag, the NCAA. They are corrupt, they hoard money and they have stupid rules. Maybe. But I tend to look at it this way: The main reason the NCAA is around is to prevent people from cheating. And people cheat constantly. If there wasn’t an NCAA to pound on then the entire Oklahoma football team would make $25,000 per summer for not washing cars.

And, finally, doesn’t California have better things to do? Clogged freeways. The state burns down every other summer. Serious problems with homelessness. There are bigger fish to fry here (climate pun intended).

California has passed a law allowing college athletes to sign with agents and take on endorsement deals. The NCAA opposes the concept, which some say will inject too much money into an enterprise already awash in it.

Nike founder Phil Knight, right in black, walks the sidelines before Oregon's national title game appearance against Auburn on Jan. 10, 2011, in Glendale, Arizona. If California's new law on athlete endorsements is implemented in Oregon it would dramatically increase Knight's ability to ... influence events.