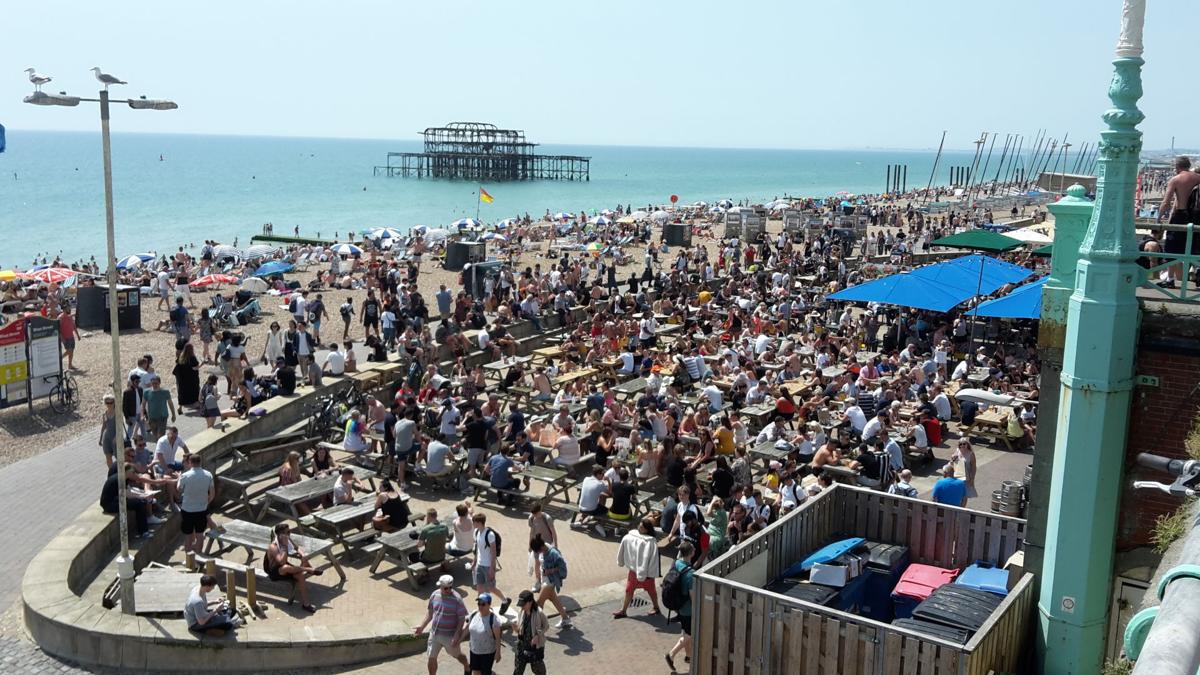 This was my first view of the beach at Brighton on the south coast of England. Hardly conducive to soaking up the vibe of the Who's masterpiece, Quadrophenia. 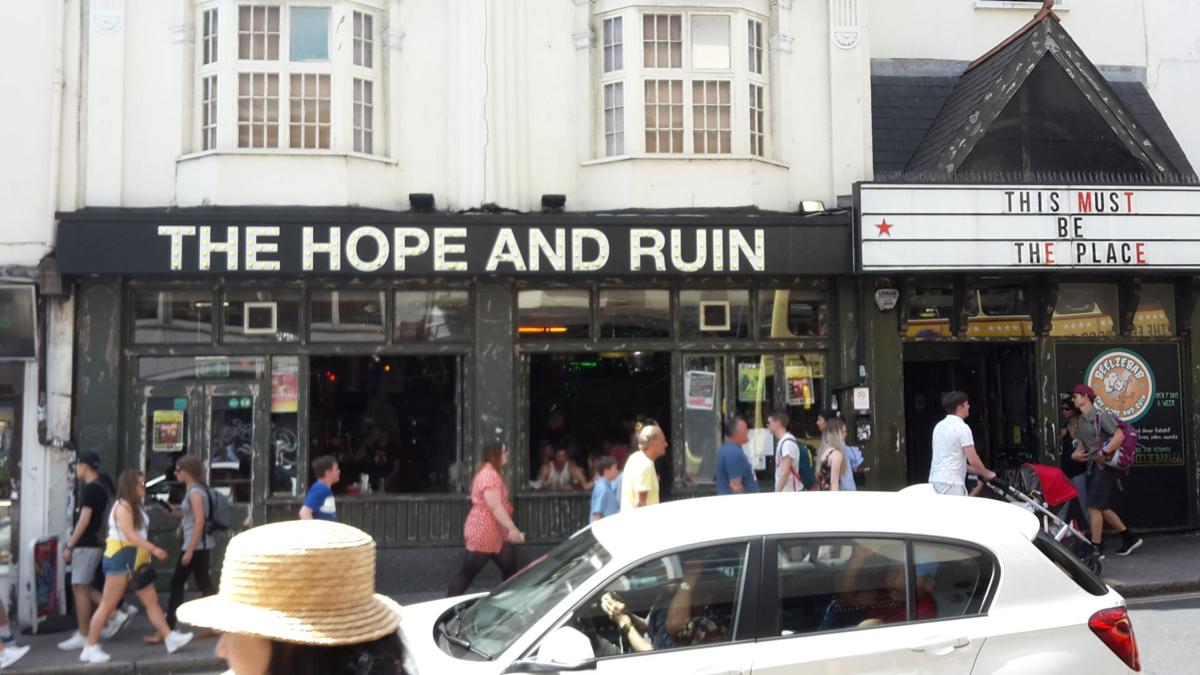 Somehow the name of this pub on the Queen's Road in Brighton served as a metaphor for my trip to the site of the mod/rocket battles of the 1960s. 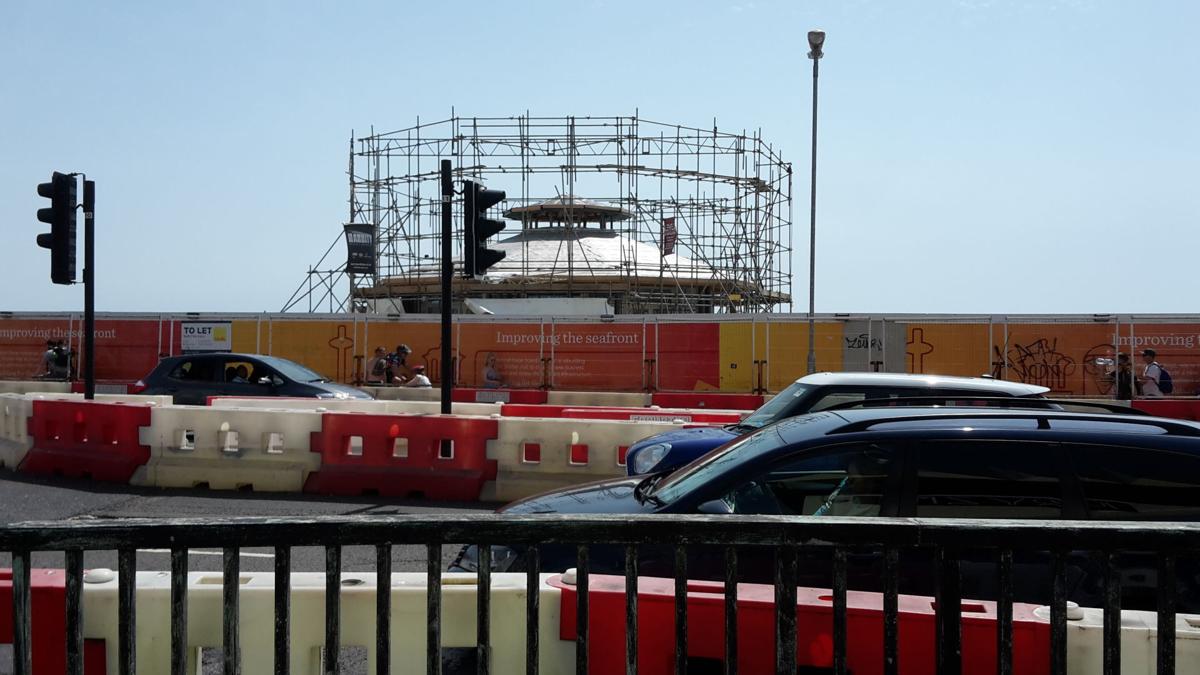 When I reached the bottom of the hill on the Queen's Road in Brighton there was no beach, no sand. Just swirling traffic, a plywood wall and scaffolding. Another metaphor for my failed quest. 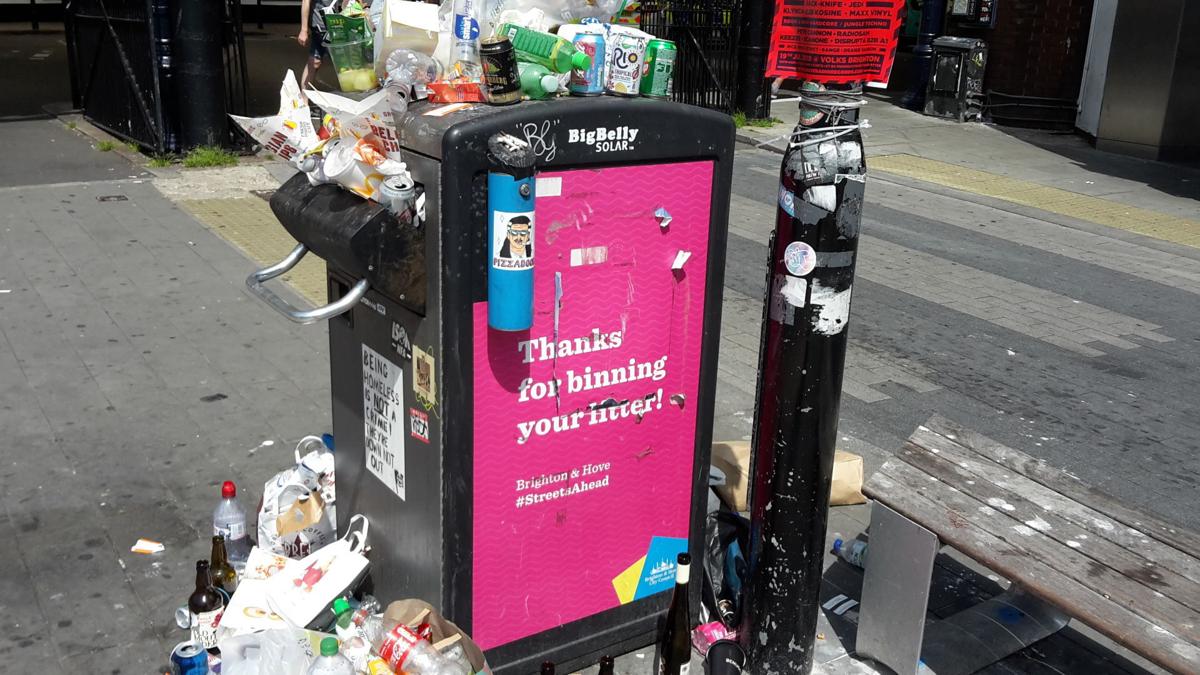 At 3 p.m. on a Saturday afternoon this was the state of the trash situation in Brighton. amazingly enough, by 4:30 p.m. they had been emptied. I have no idea how the trucks were able to navigate the gridlock. 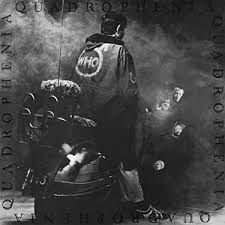 Here is the album cover of Quadrophenia, the classic Who rock opera about the mods and rockers. And Brighton.;

“Here by the sea and sand nothing ever goes as planned”

A year or so ago at the end of a splendid European vacation my wife and I were left with one final decision.

After touring Normandy, Paris and London we found ourselves at Gatwick Airport with one more day of adventure available before our flight back to the States left the next morning.

It had been a splendid trip. WWII sites, museums, food, beer, walking about, history, the Women’s World Cup, with a 1-year-old grandson who behaved astonishingly well. Yes, there had been the pickpocket incident at a Paris Metro station and my wife injured her knee. But.

But there we were at Gatwick with one more shot. We asked the desk clerk at the hotel about area attractions. She said we could go into Gatwick proper or take the train to Brighton.

Brighton? Did she just say Brighton? Yes, it was just an hour away by rail, she said. This was monumental! This was lightning from the sky! Brighton!

Why is Brighton so significant, I hear you cry? Well, to anyone familiar with English cultural history and English pop music history and the history of the seminal band the Who … Brighton is kind of like a Lourdes or a Sacred Grotto or a living, breathing Louvre.

Brighton was the scene of the fabled mod/rocker riots of the 1960s. Mods wore suits and rode scooters. Rockers wore leather and rode motorcycles. Their musical tastes also differed. The Who were mods and appealed to mods.

This history and subculture was portrayed with amazing zest by Pete Townshend and the Who in their 1973 album Quadrophenia and the 1979 film it spawned.

Quadrophenia is a great record, with a stunningly inventive premise, a great story line, magnificent black and white booklet photos by Ethan Russell and pulse-pounding music. And as odd as it sounds given the critical reputation of the group Quadrophenia never has gotten its due amid other Who successes such as My Generation, Tommy and Who’s Next.

So there I was, an hour by rail from Brighton. Poised for … for what exactly?

After having splendidly made the rail connections necessary to get us from the Little Venice area of London to Gatwick we confidently headed back to the train station, which was conveniently located inside the airport.

And descended into chaos!

The relatively empty trains we had used to get to Gatwick had been replaced by coaches engorged with men, women, children, sand buckets, strollers and day packs. There might have been sheep and goats. We couldn’t tell. All going to Brighton. Why didn’t I see this coming? I mean it was late June, it was England, and the sun was shining. What were the 9 million or so sun-starved Brits in London supposed to do … sit on the grass at Kensington Park with those reflectors firing rays at them? Well, some people probably stayed at the park. Everybody else got on a train to Brighton.

It was a local train, not an express. And at every stop, more people got on board. Sitting down was out of the question. People were drinking beers plus those gin and tonics in a can that are so popular over there. Beach gear was piling up in the overhead bins.

There were these colored icons above the doors of each coach showing how full the cars were. They were all blinking full. We were doomed. Had we a shred of common sense we would have gotten off the train (assuming we could reach the exit doors) and entrained serenely back to Gatwick, soaked in a tub and sucked down a Harp’s lager while watching more soccer.

But we didn’t. We stayed on the train. I mean, it couldn’t get any worse, could it?

We arrived in Brighton. It’s the last stop. All the rail lines that feed into the coastal city of 290,000 (and no, I didn’t know then how BIG Brighton was) stop dead at this massive station just four blocks from the beach. And then they fire up the engines and head back to London to pick up more lemmings.

We staggered out of our coach, found our way to a ticket booth, purchased our return tickets … AND STAYED IN BRIGHTON!

It was time for a family conference. How should we proceed? Oddly enough, taking those freshly minted national rail service tickets and getting back on a train to Gatwick did not occur to us. We were not at elevation nor plunging through hideous smog, but clearly something was preventing the synapses from firing properly.

Jimmy (that’s me in this scenario) wanted to walk to the beach and soak up the sensations. My wife thought this was ridiculous and suggested we get on a bus and tour the town that way. Buses were pouring in and out of the transit circle area in front of the station. Every time a new train pulled in taxis lined up in the 20s to service the new arrivals. And there were always new arrivals, believe me. Lemmings were everywhere.

I could see down the Queen’s Road that the beach was in fact there and got my first sight and sniff of the English Channel. I was determined. What would Pete say if he knew I had come this far and failed to close the deal? Remember:

“The beach is a place where a man can feel

He’s the only soul in the world that’s real”

I headed toward the beach and Paula took the bus. The sidewalks were choked with beachgoers. Garbage cans were billowing trash. The street was gridlocked. Clearly, I could walk to the beach faster than a taxi or bus could do so. I passed a pub called The Hope and Ruin. This seemed like an omen.

Along the way I developed a plan. I would reach the beach, find a place to score an ice cream cone and head back up to the depot. Keep the goals small and achievable.

Anyway, I reached the bottom of the Queen’s Road and there was no water and no beach. There was a scaffolding and a high plywood wall with signs that said “We are building a new and better beach for you” … or something like that. So I turned right at the coast road, walked past the plywood and scaffolding and eventually found a crosswalk, waited for the light, and reached the promenade. Every inch of the beach was covered with people, beach equipment, umbrellas. There was a huge outdoor restaurant/pub … people were packed to the gills (see photo). Cars and motorcycles roared up and down the coast road. The famous Brighton Palace Pier could be seen as well as gigantic hotels.

At this point I was about one click short of total stupefaction. My pleasant dream of soaking up the Quadrophenia vibe had turned into a nightmare … Jimmy walking aimlessly amid the beach lemmings croaking “the horror ... the horror.”

The good news? I found an ice cream concession in a funky old arcade. The line was crazy long, but I was not going back up that hill without fulfilling my dream. About 15 minutes later there I was sitting down at a small circular table with a view of the sea enjoying a cup of some sort of triple chocolate fudge brownie diabetes inducer.

And, then, a little wistfully, perhaps a bit wiser, perhaps, I trooped back up the hill to the depot, was reunited with my wife, and our hoped-for “early” departure back to Gatwick. Because, clearly, all of these folks who came all the way to the beach were going to stay awhile, right?

Then we discovered that all of the trains were being held in Brighton because of some track/switching malfunction a few stops up the line. No! They can’t keep doing this to me! It was madness. People trooped into one train … and then were stampeded out again to another one. More lemmings joined the crowded platform. Conflicting announcements blared over the loudspeakers. Finally, we got on a train. And it went nowhere for 15 minutes.

Then, finally, it started moving. It was just as packed as the Brighton-bound ones from earlier in our adventure (what day was that?). But people kept getting out at the stops. About halfway to Gatwick we actually founds seats. The world did not end. We survived.

The Who released the 4-sided vinyl record in 1973 (it is also available in a 2-CD version). The “four sides” of the main character Jimmy also mirror the personalities of the four Who members: Pete Townshend, John Entwistle, Roger Daltrey and Keith Moon. Townshed also established recurring musical themes to represent the four characters/sides. Franc Roddam directed a 1979 film version that featured Sting as Ace Face/bellboy.

Blog/Analysis: A “new” Reser Stadium but at what cost?

This was my first view of the beach at Brighton on the south coast of England. Hardly conducive to soaking up the vibe of the Who's masterpiece, Quadrophenia.

Somehow the name of this pub on the Queen's Road in Brighton served as a metaphor for my trip to the site of the mod/rocket battles of the 1960s.

When I reached the bottom of the hill on the Queen's Road in Brighton there was no beach, no sand. Just swirling traffic, a plywood wall and scaffolding. Another metaphor for my failed quest.

At 3 p.m. on a Saturday afternoon this was the state of the trash situation in Brighton. amazingly enough, by 4:30 p.m. they had been emptied. I have no idea how the trucks were able to navigate the gridlock.

Here is the album cover of Quadrophenia, the classic Who rock opera about the mods and rockers. And Brighton.;