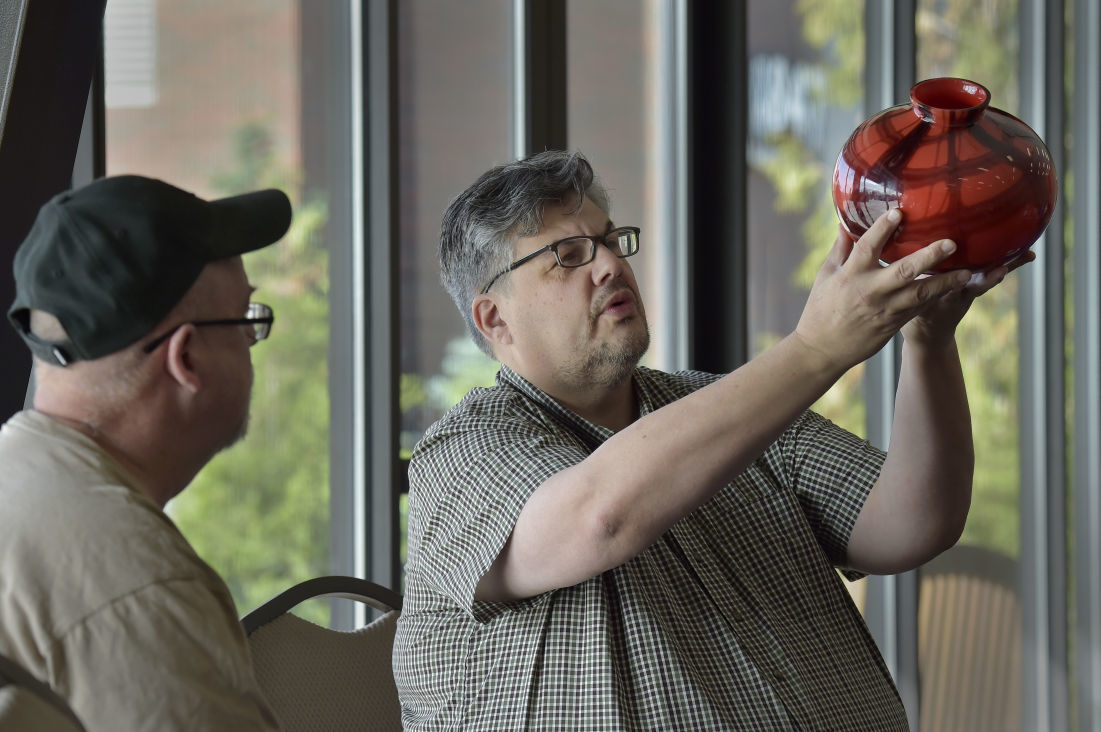 Gary Germer, principal of Gary Germer & Associates, appraises a vase brought in by Chris Muller of Albany at Saturday’s Lebanon Chamber of Commerce Antiques Appraisal Clinic at the Samaritan Center. 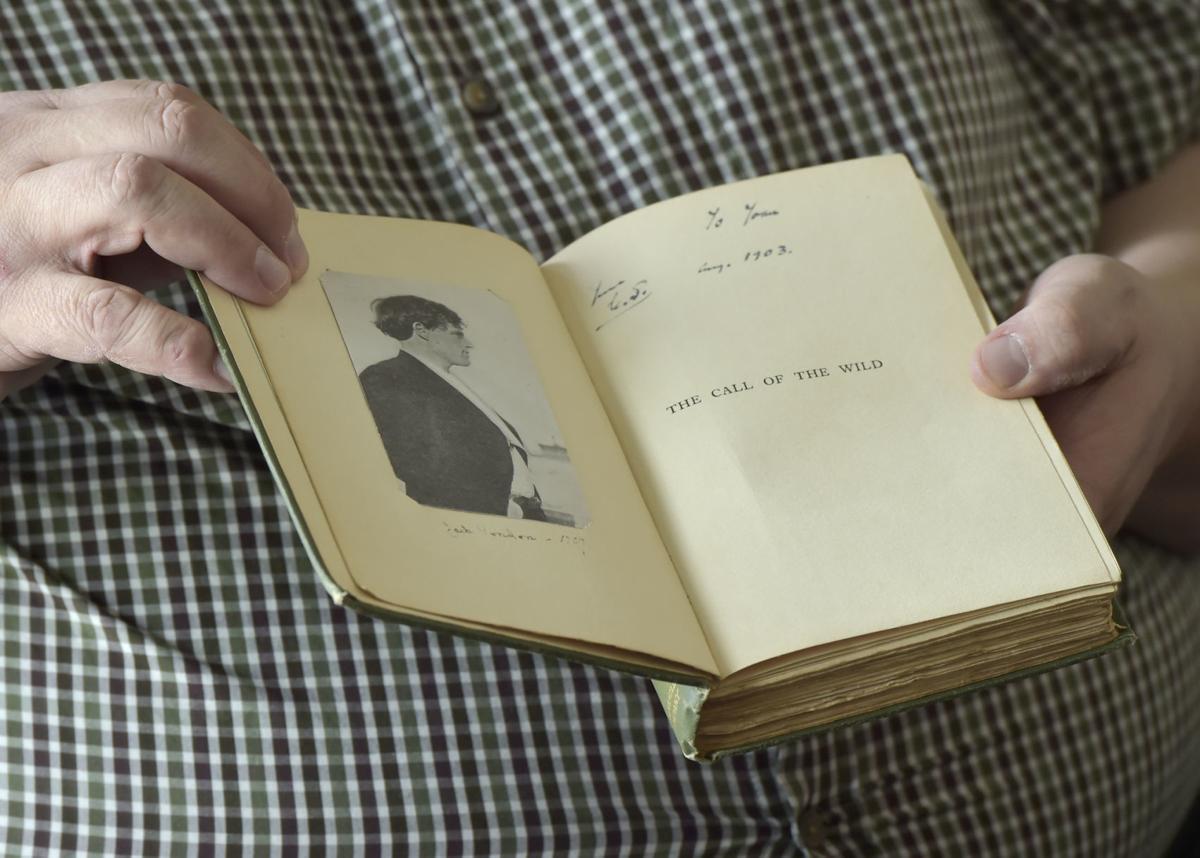 Muller’s rare, signed first edition of Jack London’s “The Call of the Wild” was estimated to be worth between $4,000 and $6,000. The author’s signature is below his photo. 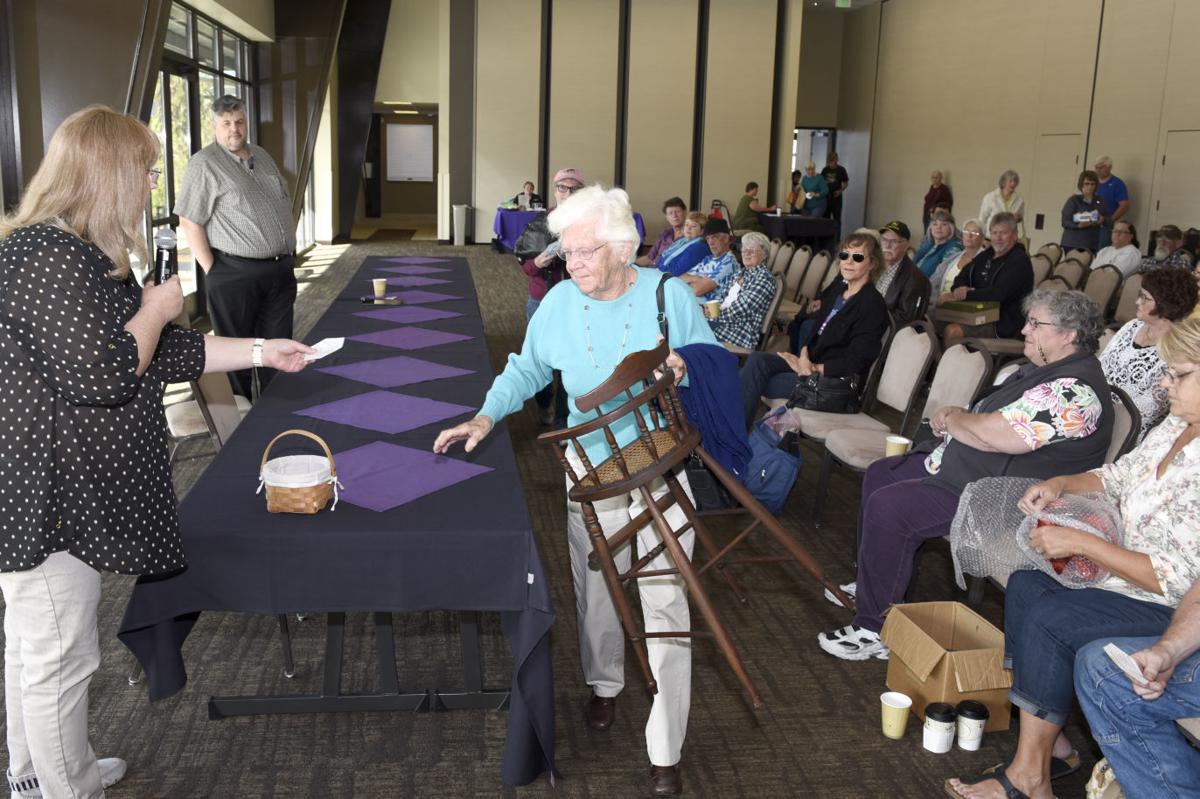 More than 30 guests attended the clinic to have their treasures appraised. 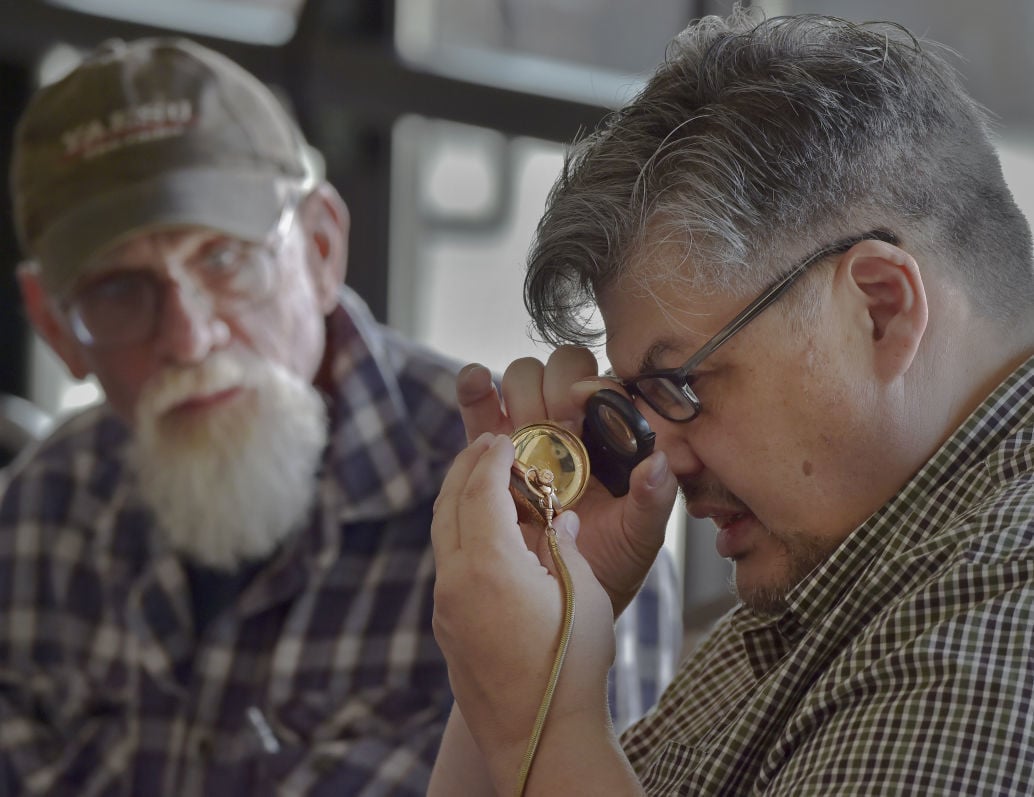 Germer uses a loupe to get a closer look at Foster resident Fred Uhlig’s pocket watch, made in 1909. 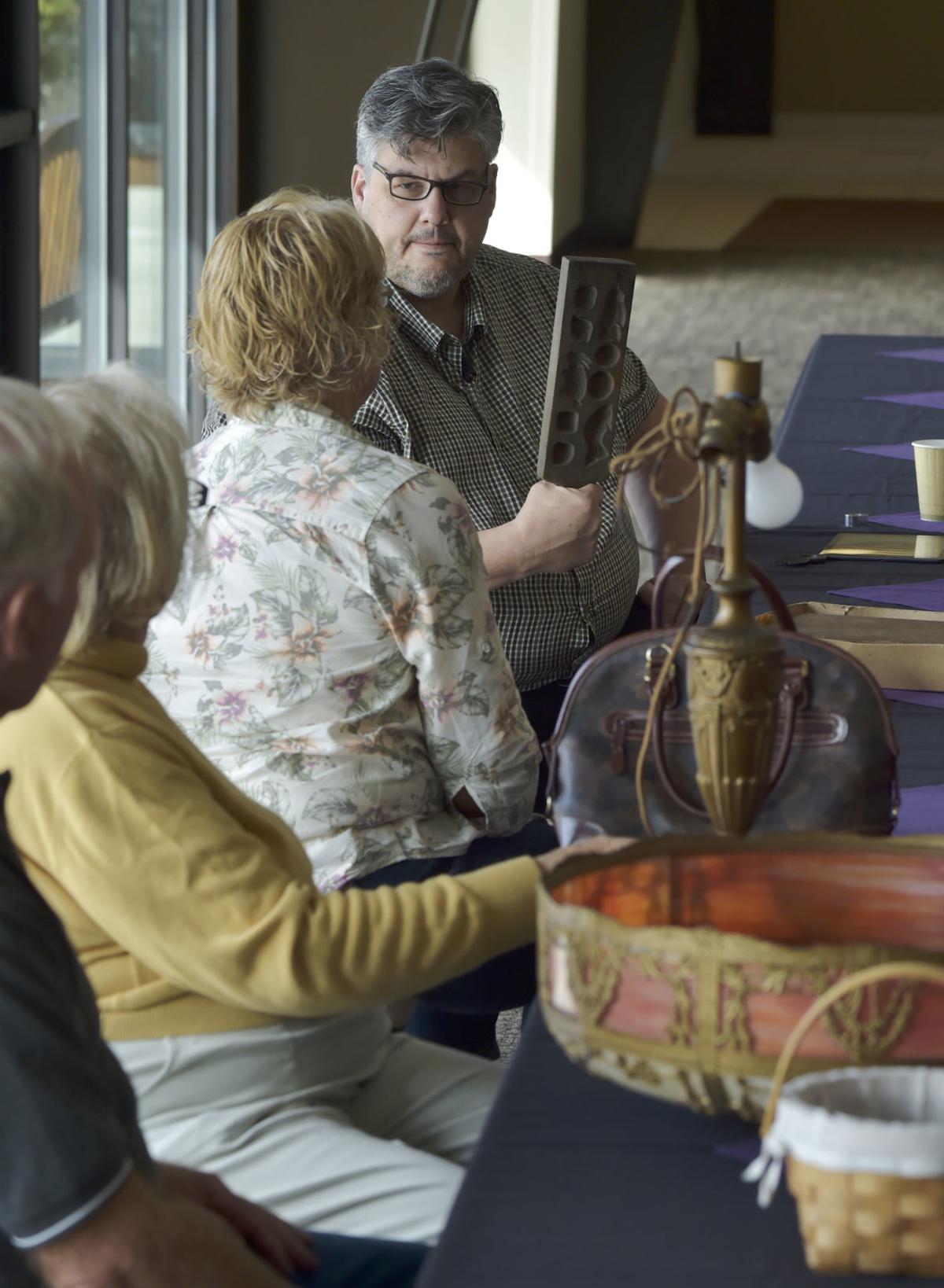 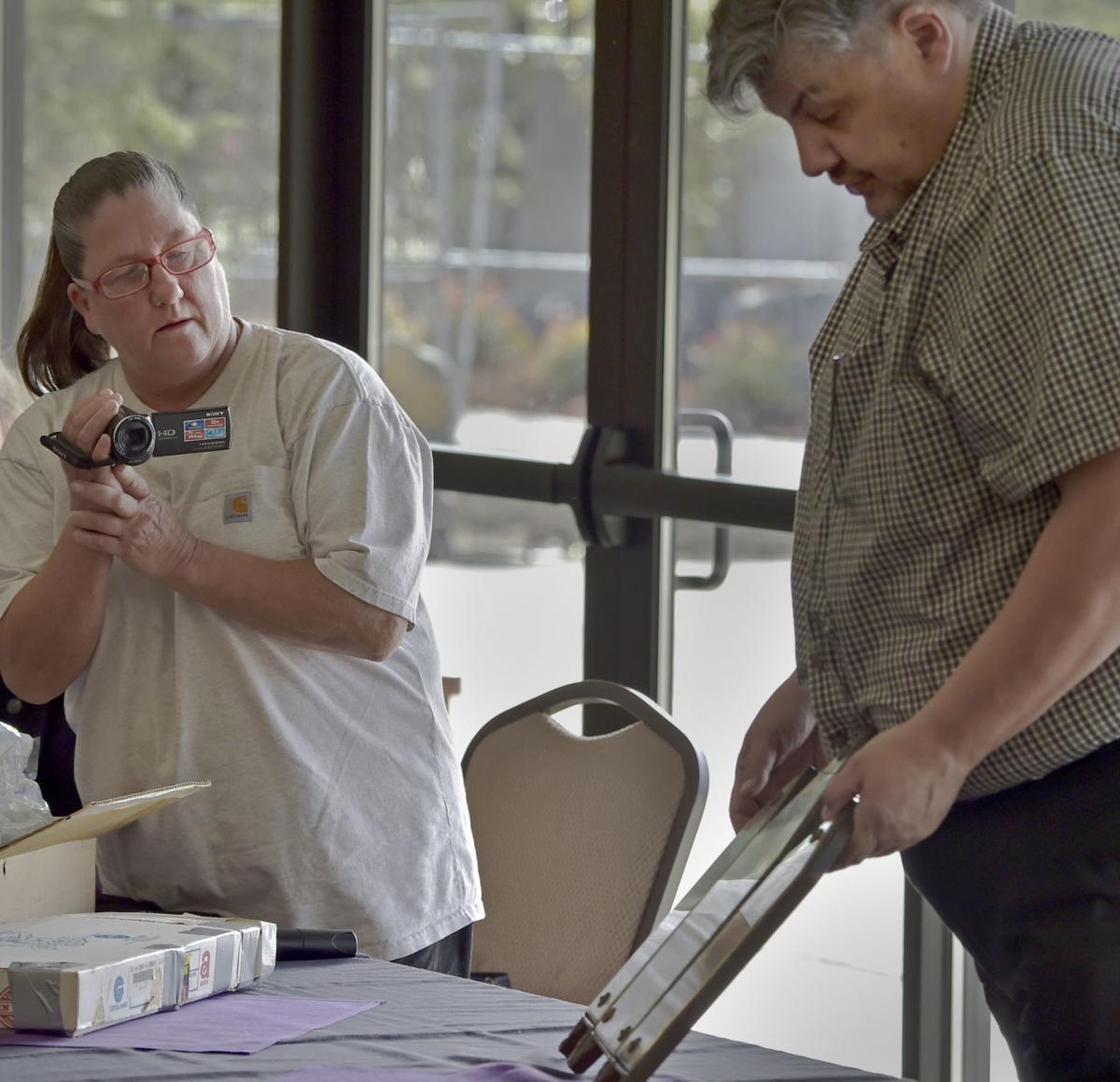 Anne Bottger of Foster records the appraisal of her three-section mirror.

Attendees paid $10 to have two of their curious valuables examined by the respected Portland-based appraiser. His wealth of knowledge made each one interesting for all involved. Most learned something new about what they had, others discovered a greater value than they'd expected.

More than 30 participants sat ready, clutching lamps, watches, books, old instruments and a few items that begged description, each waiting to meet with Germer. It was like an idle parade of stories waiting to be revealed: some grand, some not so grand, and all of them interesting.

To kick off the clinic, Germer gave a run-down of the process and qualified his method against the popular "Antiques Roadshow" model.

"What they do is they act like it's the first time they've ever seen you when they're filming," he said. "But the reality is that you've been there for three hours and they've called everybody who's an expert in the nation and come up with all this wonderful information by the time they talk to you."

Germer was not, in fact, working with the robust "Antiques Roadshow" support team, but he did have his considerable and encyclopedic knowledge, as well as his tablet, on hand.

"This really is off the top of my head," he said. "The only person I know that could really know everything is my 14-year-old nephew, and he couldn't come with us today."

When Lebanon resident Jan Wollett brought what she believed was a marketing belt buckle from Coca-Cola, Germer revealed the reality in a way only a seasoned pro could.

"This is a very popular collectible," he said, "and they're all fake. Coca-Cola never sponsored a belt buckle. I would put its price at around $20."

"This is much more fun," she said, holding up a sterling silver charm bracelet that included 12 Disney characters.

"The fact that it's original Disney and you have 12 of the characters, I would say puts this in the $500 range," Germer said.

Others brought old steamer trunks, cast-iron cookie molds and art glass lamps, each one learning something new at the very least. A Thomas Edison "model H" Talking Machine, the precursor to the phonograph, was one item Germer expected would fetch between $700 and $1,000, and he gave a reason.

"The Millennial Generation are not as much into the decorative stuff," he said. "They don't want the formal and the fussy, but what they really do want is anything that has to do with technology. Anything tech-related in antiques is hot right now."

While gadgets may be the valued item in today's market, some things will never lose value. In fact, they can only grow, as Chris Muller of Albany learned when he brought up a 1903 copy of "The Call of The Wild," written by Jack London. Muller said he found the book in a library of similar books left to him by his grandparents. On its own, the book is an interesting find, but Germer had a little more to say about it.

"When it comes to books, you want to look at condition first, and this one's in good condition," he said, "What's got my attention, and a lot of times you might get $5 or $10 for one of these, but what really made me do a double-take is that it actually is signed by London."

Germer held out the book to show the signature, which sat under a photo of the author on the inside front cover.

"So somebody has a picture of Jack London that they put in here, and he signed it here in 1909," he said.  "So they must have met him and had him sign the book."

Knowing he was holding a piece of considerable value, Germer explained that appraising the book might be a little more involved.

"It's probably more than I could do for your here today," he said. "But let me see if I can do something here."

Germer then referred to his tablet, looking up the value of related books through professional channels online. He found one matching the description of Muller's book.

To the applause of the other attendees, Muller called out, "Top that!" with a laugh.

"I was really surprised," Muller said later. "We have a whole study full of books like that one and we just happened to notice the Jack London book and we thought we might check it out."

Joking with his wife, Kelly, Chris made reference to a college fund. The couple also brought a glass vase, a cookie mold, and another very large book on medieval graphic art methods, "The Art of Illuminating as Practiced in Europe from the Earliest Times." That one was valued at $200, as was the vase. The cookie mold carried a value of $150.

All in all, it would seem the Mullers got their $20 worth.

Gary Germer, principal of Gary Germer & Associates, appraises a vase brought in by Chris Muller of Albany at Saturday’s Lebanon Chamber of Commerce Antiques Appraisal Clinic at the Samaritan Center.

Muller’s rare, signed first edition of Jack London’s “The Call of the Wild” was estimated to be worth between $4,000 and $6,000. The author’s signature is below his photo.

More than 30 guests attended the clinic to have their treasures appraised.

Germer uses a loupe to get a closer look at Foster resident Fred Uhlig’s pocket watch, made in 1909.

Anne Bottger of Foster records the appraisal of her three-section mirror.